Aussie songstress promises to leave the lights on 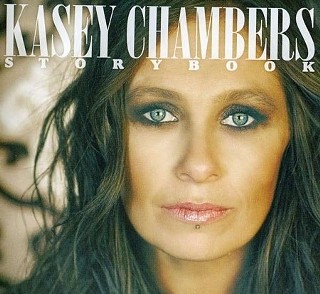 Since her 2000 debut The Captain, Kasey Chambers and Austin music fans have enjoyed a passionate love affair. Safe to say the songbird is just as beloved here in Central Texas as she is back home in Australia. She returns to her favorite U.S. city Thursday night, taking the stage at the One World Theatre for two shows, 7 & 9:30pm.

We spoke last weekend about Chambers' recent autobiography, A Little Bird Told Me, and its companion CD Storybook, a covers collection of songwriters including Lucinda Williams, Gram Parsons, John Prine, and Hank Williams.

Geezerville: Please don’t take this the wrong way, but aren’t you a little young to be writing an autobiography?

Kasey Chambers: I take that as a compliment! It’s not very often I get called young anymore. I’m married with three kids now, and I tend to feel old most days that I wake up. But I think I’ve lived a lot more than most 36-year-olds have. I have a lot of experiences. I had quite an odd childhood and upbringing. Much of the book was kind of my own personal therapy. I was dealing with things in my life that I probably hadn’t dealt with properly.

G: I recently spoke to the other Australian Austin loves, Paul Kelly, about his autobiography. Have you read that? There’s some parallels with you both releasing CDs to accompany them.

KC: I haven’t, but my husband has and he says it’s amazing. I just love Paul Kelly. It’s funny we wrote our books at the same time. I ran into him once and we talked about writing – not knowing we were both in the middle of our books. The CD I recorded is a bit different though. We recorded a bunch of things from all of my favorite covers. But I have that thing that Paul Kelly is what I measure everything in the world against. I think that if Paul Kelly can do it, anyone can do it. He just does everything for all the right reasons. I love him for that.

G: How difficult was it choosing songs for Storybook?

KC: It was more difficult to pick which artists I wanted to cover. It was obvious I was going to have Lucinda and Gram Parsons and Hank Williams. They're all people who've had a huge influence on my life. That part was obvious. Within that, it was hard picking which song from those artists to cover. I think I could have made a whole other album with the same artists but different songs.

G: Some of the songs aren't obvious choices. Like the John Prine song, “Leave the Lights On.”

KC: Sure, and not-obvious is what John Prine's often about. He’s into all sorts of things besides the folkie ballads that we know him for. That song was picked mainly because of the album it's on, Lost Dogs and Mixed Blessings. I talk a lot in my book about the band I started with my dad and my husband called the Lost Dogs, where we do all our favorite covers. So I wanted to pick a song off that record. It’s funny that I don’t hear a lot of people say that’s their favorite John Prine record, but I just have so many memories connected with it.

G: The other songs that stand out are Suzanne Vega’s “Luka” and Cyndi Lauper’s “True Colors.” Were they hits in Australia?

KC: Yeah they were. Those two were chosen more because of the song than the artist. As much as I love Suzanne Vega’s stuff I always wanted to cover that song. I remember hearing that song on the radio in my early teens and it was one of the first non-country songs that I heard that made me feel like a country song. I wasn’t really connected to pop music at that time.

G: I understand you’ve completed an album of new songs with your husband Shane Nicholson. Wreck and Ruin is set for release in Australia, but will we be getting it here any time soon?

KC: I think we’re going to bring it out in October. I think we’re coming back in September. Shane and I wrote the whole record together. It’s very influenced by traditional country music.

G: Does that mean you’re playing some new songs on your current tour?

KC: No, but not for any reason other than Shane’s not here. I actually said to him that I might learn one or two of our new songs and take them on the road, but we specifically wrote for two voices. It’s a lot about harmonies, so when I went to do them on my own they didn’t sound as good. Don’t tell Shane that. I don’t want him to get a big head. Kasey, Shane, and a Monkey on a Wire
Kasey Chambers and Shane Nicholson get animated