Thanks, from one “mouseburger” to another 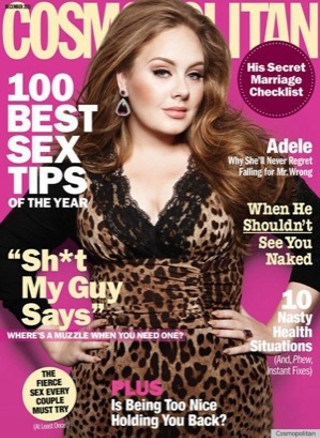 Past Janis Joplin and Grace Slick, perhaps, equality didn't come to rock & roll until the mid-Seventies, with punks like the Runaways, Chrissie Hynde, and Deborah Harry. Helen Gurley Brown, who died Monday, preceded them not in music but in mindset – even if her Cosmopolitan magazine wasn't exactly a fashionable read for the musically inclined.

Flip back through the last five decades of glossy covers and on almost every one you find S-E-X printed in big, bold letters atop an airbrushed woman. Sadly, neon graphic art and celebrity side boob might be the only association drawn by some for the magazine's former editor-in-chief, who was 90.

It’s true that the violent femme brought Cosmo from a Midwestern monthly to a metro bible for fashion, beauty, and, you guessed it, sex. But Gurley Brown was more than a hormone-crazed, carb-deprived New Yorker. The culture guru influenced women in all walks of life, bringing "all the single ladies" into the limelight before Beyoncé was even born.

She took the liberated, swinging Sixties to their full height, promoting her own brand of feminism to the figures that defined sexual roles and fostering the new image of a woman that we would see in years to come in music, film, and television. She was an icon, an author, and, despite the opinion of many pundits, a trailblazing feminist.

My sophomore year at the University of Texas introduced me to Gurley Brown’s legacy. As an aspiring music journalist, I was drawn to her story – a Horatio Alger rise from the bottom to a 32-year reign as editor of one of the largest magazines in the world. I also saw many parallels between us.

First and foremost, I'm a mouseburger, a name Gurley Brown used to describe girls who lack pedigree, privilege, or an Ivy League education. It was a term she liberally applied to herself. Clawing her way from secretary to the West Coast’s highest-paid woman in advertising, Gurley Brown separated herself from the Fifties boy’s club that dominated workforce politics.

In 1962, a year before Betty Friedan’s Feminine Mystique, Gurley Brown published Sex and the Single Girl, the bestselling handbook for early feminism that inflamed the sexual revolution. Three years later, she assumed the role of Cosmo’s editor, broadcasting her message that women could have it all – “love, sex and money.”

While audiences now crave controversy through shaved heads and infidelity, Gurley Brown created scandal in the Sixties by preaching that everyone, including women, should enjoy sex – even without fidelity. She birthed the liberated woman in a world that couldn’t quite shake out the prim starch from the Fifties.

I may not be a Cosmo girl, but I'm certainly a Gurley girl. She taught this fellow mouseburger that I could just as proudly call myself a feminist as I call myself feminine. Not all of her teachings translate to today’s woman – encouraging mild anorexia, scouting men in the workplace, and marrying the boss – but she called attention to the gross gender inequality in the workplace and made huge strides in closing it. She recognized and pushed for women to not only have equal representation to men in society, but also in the bedroom.

Most of all, I believe that Helen Gurley Brown made feminism accessible. It wasn’t just for academics like Betty Friedan’s brand of second-wave feminism, and it certainly wasn’t about man hating.

It was about realizing that being a woman doesn't come with limitations.