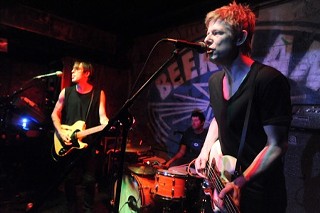 Britt Daniel (right), with the Divine Fits at Beerland, 8.1.12 (by John Anderson)

"Thanks for coming. Here's some songs you don't know," greeted Spoon frontman Britt Daniel at Divine Fits' first scheduled show Wednesday night at Beerland. A mob of photographers monopolizing the space in front of the tiny stage gave the event an air of importance, while fans of the supergroup's primary members craned their necks from the back of the club.

Hometown boy Daniel started it off with the pulsating bassline of "Flaggin' a Ride," seeming approachable as he sang something like, "I know you see me/ I’m just like you/ I'm just trying to make my way/ I got a feeling that you can relate." The band, meanwhile, ushered in a dark art rock sound with synth accents, metronomic drumming, sequenced guitar effects, and sticky choruses.

Daniel and Dan Boeckner traded vocal duties as they worked through songs from their upcoming album, A Thing Called the Divine Fits. It took until the fifth song, the Boeckner-led "For Your Heart," to make the crowd erupt. The skittering keyboard loop doubled the drumbeat as Boeckner and Daniel, now both playing guitar, swelled minor voicings into an impressive sound field and beat that drew big cheers.

Later, Daniel awed the audience with covers of the Wipers' fatalistic "Doomtown" and Rowland Howard's "Shivers," which begins with the couplet, "I've been contemplating suicide/ But it really doesn't suit my style." Along the way, Daniel, Boeckner, and auxiliary member Alex Fischel alternated instruments, letting their inexperience show just once when they became confused as to who played what instrument on a song.

The quartet looked like a band itching to play live: eyes bright, kicking around the stage with youthful energy, and thanking the audience profusely after each song. For the LP's Smiths-like lead single, "My Love is Real," Boeckner sang without an axe and used the opportunity to get on the dancefloor, sing at foot level, and fall to the ground.

Calling an off-setlist audible, the Fits finished with a cover of Tom Petty's 1982 keyboard-driven hit "You Got Lucky." Afterward, no one yelled for an encore. It wasn't because they didn't enjoy the show. Divine Fits didn’t know anymore songs.

For all the hype and curiosity that surrounded this gig, Daniel, Boeckner, and company played strongly and succeeded in what they needed to succeed at: sounding like a band. 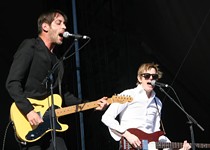