My living in New York in the Eighties and Nineties meant the Ramones were a local band. I wasn’t hip enough to have seen them at CBGBs, but I did catch them a few times after punk broke. I recall them playing in front of what I'm guessing was 10,000 people – though I could be wildly mistaken – on a pier on the Hudson River in the Eighties, with the Divinyls opening.

Looking back, I'm still struck by the similarities between Ramones fans and Dead Heads: every kind of disenfranchised freak. They were looking for something to hang onto besides miniscule amounts of sex, drugs, and rock & roll, finding camaraderie in love for a band.

Take note, then, Ramones nation that there’s a new album by Joey Ramone, who died in New York in 2001 after a long battle with lymphoma. Joey, self-consciously tall and gangly, was the king of the freaks. ...Ya Know? is 15 demos and unreleased tracks recorded in a variety of settings over the last 15 years of the singer's life.

It’s not the best disc you’ll spin this year, but it’s interesting to hear Joey’s other sides. Are those really vibes on “Make Me Tremble”? “Waiting for that Railroad” could almost be a country song.

And yet, if you need one last Ramones fix, this is it. I say last as if there won’t be more posthumous releases since the estates of Jimi Hendrix and Stevie Ray Vaughan have taught us to never say never. Nevertheless, ...Ya Know? is primitive and hard enough to satisfy. 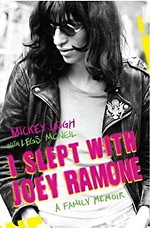 I Slept With Joey Ramone: A Family Memoir
Have axe, will grind