Front page stars of the 'Chronicle,' from Black Angels to Ume

Now we know the full lineup, it seems pretty clear that Fun Fun Fun Fest and the Chronicle have similar tastes: Just look how many names at FFF 2012 have graced our cover over the years. 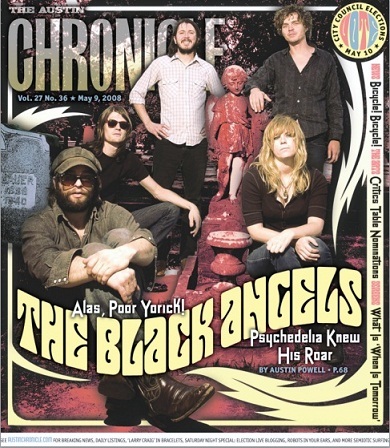 "Paranormal stuff definitely wouldn't surprise me," agrees guitarist/bassist Nate Ryan. "I haven't experienced much, but I'm open to it. All of these rooms used to be part of an old-folks home. Countless people have probably died in our practice space. Sometimes I like to think about that late at night and try to conjure up something in there. All of those weird experiences filter into the music."
– I See Dead People: The Black Angels unveil 'Directions to See a Ghost' by Austin Powell, May 9, 2008 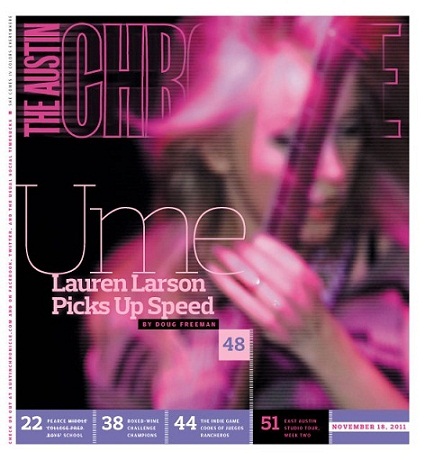 "When people see an aggressive female rocker, there are certain misconceptions about it," Lauren Larson acknowledges a week later, the band gathered around a table at Rio Rita on East Sixth Street. "It cracks me up."
– Like a Hurricane: The Agony and the Ecstasy of Ume by Doug Freeman, Nov. 18, 2011 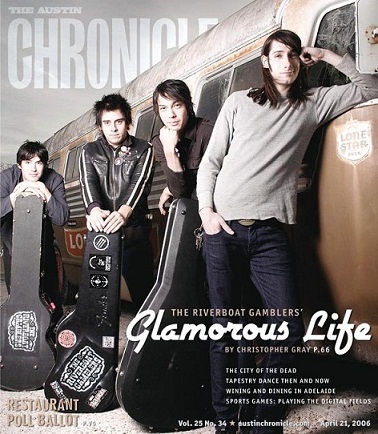 "The Great State of Texas, whose image has been battered and bruised more than a champion bull-rider in recent years, couldn't ask for better cultural ambassadors than Austin's Riverboat Gamblers"
– Let it Bleed: The Riverboat Gamblers take aim at their enemies by Christopher Gray, April 21, 2006 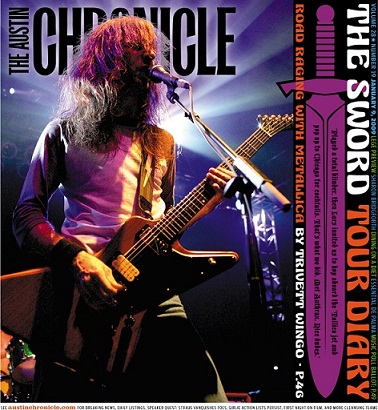 Lars, Hetfield, and Trujillo came to our show tonight. We played a really good one. It's crazy to think about 'Tallica on their night off wanting to come see a band they already play with every day. Lars keeps telling me that I am his hero, whatever that means. We went to a bar later where he put "Freya" from our first album on the jukebox and declared it the quintessential metal song. True or not, this is all really flattering.
– Seek and Destroy: The Sword's slice of Metallica by Trivett Wingo, Jan. 9, 2009 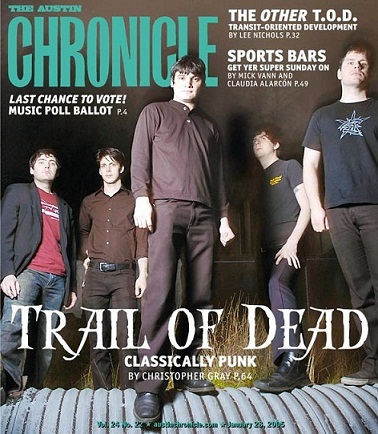 "When we first started, I don't think either of us had any expectations at all," says singer/guitarist/drummer Conrad Keely nine days earlier, as he and Trail of Dead co-founder Reece relax among the Japanese lanterns and rusted patio furniture of campus-area coffee den Spider House. The clicking laptops and hum of hipster conversation are light-years away from the Midtown mania surrounding Letterman's Ed Sullivan Theater.
– The Mob House Rules: … And You Will Know Us by the Trail of Dead use their inside voices on 'Worlds Apart' by Christopher Gray, Jan. 28, 2005 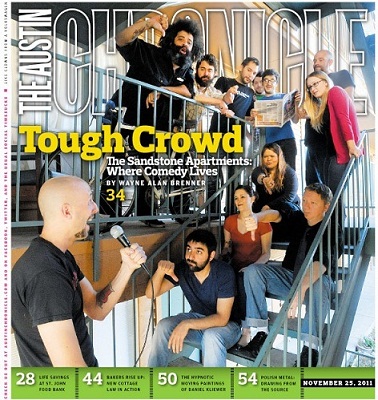 "The afternoon's cause célèbre, as if there had to be one, was about how 90% of the people at Fun Fun Fun Fest kept mistaking Austin comedian Chris Cubas for the much more famous NYC comedian and musician Reggie Watts and how Cubas capitalized on the situation by telling autograph hounds and starry-eyed interviewers things in the third person: "Reggie Watts doesn't tip – Reggie Watts doesn't believe in tipping" and "Reggie Watts says Glenn Danzig sucks" and so on. Twitter, unsurprisingly, was blowing up with the hoax."
– Where Comedy Lives: Austin stand-ups have a complex – and it's called the Sandstone Apartments by Wayne Alan Brenner, Nov. 25, 2011 "Each member of Explosions in the Sky is branded with the same emblem: the black outline of an angel tattooed on his inner left wrist. "The one visible tie that bonds," nods guitarist Munaf Rayani."
– Catastrophe and the Cure: Behind the scenes of Explosions in the Sky's most challenging and personal album by Austin Powell, July 1, 2011 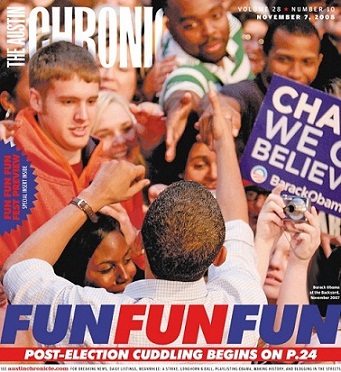 "The Tears and Music of Love," "Chandelier Searchlight," "Buck and Judy," and "Family of Others" are grownup Deerhoof, complete with tangible, guitar-driven melodies.
– Deerhoof, Offend Maggie, reviewed by Audra Schroeder, Nov. 7, 2008 – the year Fun Fun Fun shared the cover with President-elect Barack Obama 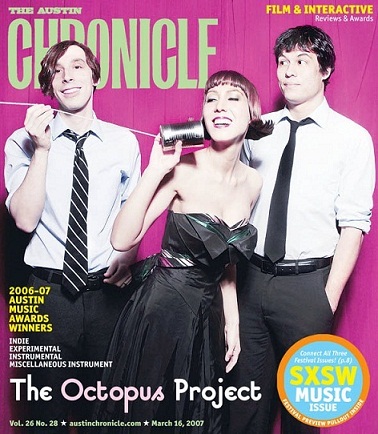 Don't know about anyone else there, but when the Octopus Project started playing with Black Moth Super Rainbow (they just made an album together), the energy started swirling, whipping around, kids started jamming in, taking up space like Japanese high-rises, anywhere we could fit, and there, pushed up against the wall, barely catching a glimpse of the audio-visual extravaganza, I felt the floor give.
– The Octopus Project live reviewed by Kate Getty, March 18, 2007

Fun Fun Fun Fest, ... And You Will Know Us By the Trail of Dead, The Black Angels, Chris Cubas, Deerhoof, Explosions in the Sky, The Octopus Project, Riverboat Gamblers, The Sword, Ume, SXSW