Q&A with the Indigo Girl 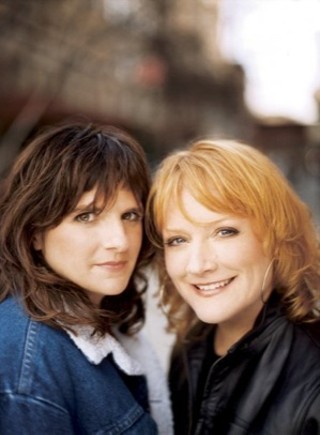 For their Paramount Theatre show Friday, the Indigo Girls arrive in a rare configuration: backed by a band, Atlanta's Shadowboxers. Next month in Dallas, the Georgian duo of Amy Ray and Emily Saliers will be backed by the Dallas Symphony. Having played together more than 30 years, the Indigo Girls are still full of surprises – to their fans and themselves.

Austin Chronicle: Later this month you're performing with symphonies. Ever done this before?

Amy Ray: This is the first time, and we'll be doing that throughout the next year. It's something we've always wanted to do, but it takes a lot of preparation, and we finally have the time to focus and make that happen. When we have string charts ready, we'll go to each city and go through the charts before the show.

It'll be different in every city though. Every orchestra is different, so it'll be cool to have that kind of challenge and experience – seeing what they're like to play with. You give it over to them and follow them instead of trying to run the show.

AC: What will working with symphonies lend your sound?

AR: Just more dimension. On some of the records we've had orchestras for the string parts, so we'll be able to do songs that represent the record in a way we haven't done before. For people who've heard us a lot, it's a refreshing new experience.

AC: The Indigo Girls' last four albums have been released independently. Before that, y'all spent the majority of your career on major labels like Epic and Hollywood.

AR: Hollywood was our last ditch effort to be on a label other than our own. It was okay. They definitely introduced us to some great people that we worked and built relationships with, but it wasn't really for us. It was time to do our own thing. Now, we have the best of both worlds, really. We have this label, but we're distributed by Vanguard Records, which has a great history and great infrastructure. We can use their resources.

AC: Over the years you've collaborated with a lot of musicians. Even your first hit "Closer to Fine" was a collaboration with Hothouse Flowers. Is there anyone that you haven't worked with that you would like to?

AR: Yeah, we haven't worked with any hip-hop artists. Not that we would do a hip-hop song, but people like Andre from Outkast or Mary J. Blige are people we really look up to. It'd be interesting to collaborate with someone like that, someone really outside the box. Or Dolly Parton. That's someone I've always wanted to do something with, but it's not going to happen unless by some weird coincidence we're at the studio on the same day.

AC: When you and Emily began playing together as the Indigo Girls did you expect this to be such a longterm project?

AR: Not really, no. We were so young. When we started singing together we were 16. We just did the band for fun, which we still do, pretty much. We are not super ambitious. We sort of work toward a vague goal in the back of our minds.

We want to evolve, we want to challenge ourselves. We've got esoteric ideas of what we want to be philosophically, but it's not that we want to make this much money and have this many albums in this amount of time. I think the way we looked at our career was just one day at a time. I wanted to play music in whatever shape that took, even if I had to work a day job to do it.

AC: After working with Emily for so long are there any surprises left between you two or are you completely in sync creatively?

AR: We're in sync, but there are definitely surprises, which is important. Even at shows, Emily will play a guitar lead one night, and I'll be like, 'Where did that come from?' because it's totally weird and unlike anything she's ever played. Things like that still happen and I think that songwriting-wise, it's important to acknowledge to ourselves that the other person knows something important that we don't.

The Shadowboxers, the band we're playing with now is a band that Emily introduced to the group. You bring in different things – different collaborations, different songwriting, different producers. You just have to keep doing that so you can challenge each other to look at your own music in different ways. I think if it was the same old thing every time, I probably wouldn't keep doing it, and I don't think Emily would either.

AC: You've worked with a lot of humanitarian causes. How do you balance humanitarian efforts with your music career?

AR: Even if we weren't musicians we would be working for activist causes and community-based activism groups. Balance is inherent because it's what we'd be doing anyway, so we always allow time for it. Every job you do there's a way to access helping groups out, because you always have some sort of resources.

If you work in a library you can help fight censorship. If you work in manufacturing you might work on labor issues. For us, we get to see a lot of things when we travel. We gain access to a lot of great activists from various projects, so we use that and also reach out to different communities ourselves.

AC: As an openly gay musician do you feel that you have a certain social responsibility in your music career?

AR: No. The reason we do this stuff isn't because we feel a responsibility as gay musicians or even as musicians. It's not a burden or a responsibility just because we're gay and in the public eye. To us they're important civil rights issues. It could be about toxic waste dumps. It has nothing to do with us being musicians, it's just who we are. We're amplifiers for the people doing the work in the trenches.