Get Real. Get Right. Get Savage: The Return of Barrence Whitfield 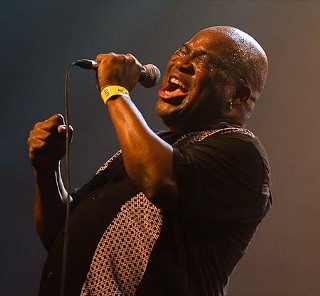 Barrence Whitfield & the Savages' visits to Austin in the Nineties are things of local legend. Wild, crazy nights of pure rock & soul abandon. Whitfield's reunited with the heart of the original band and returns to the Continental Club on Friday and Saturday nights, with Houston bluesman Little Joe Washington opening the latter show.

Austin Chronicle: I see you just celebrated a birthday.

Barrence Whitfield: Believe it or not, I turned 57.

AC: You still perform a lot?

BW: Definitely. As a matter of fact, last night I was down in Boston doing a tribute to one of the sax player in the Savages. The one that recorded Ow! Ow! Ow! and Live Emulsified. Part of that was recorded in Austin at an old place called the Liberty Lunch.

BW: Yeah, but I used to love playing there. Anyway, he was my sax player at the time and he passed away last Christmas. Lots of sax players showed up and we did this wonderful tribute jam. It was great.

So yeah, I've been playing a lot and now that I've gotten back together with Peter Greenberg, who was the originator of the Savages, and [bassist] Phil Lanker, it's just been fun. We've gone to Europe and just knocked 'em dead over there, plus our last record came out over there first, Savage Tracks.

It's just been great. I wish we could play a lot more places in the States, but it's been time consuming and difficult. I'm sure happy that we get to go down to Austin and do our thing. I think the people there are going to see some energy.

BW: We're really looking forward to it. It's been a real long time since we played in Austin. I have so many great memories of going down there and playing – hanging out and staying with musicians who lived there.

AC: Who did you roll with when you were here?

BW: In the early years I used to stay with Keith Ferguson. He played with the Thunderbirds and Tailgators. He was a great bass payer and a great guy. It was wild times at his house. He always had things going on over there, man! Also Evan Johns, who had the H Bombs and also played in the Leroi Brothers. I hung out with some guys from the band Shakin' Apostles. It was great playing Antone's and meeting Clifford. I remember looking at his right hand and seeing gold rings as big as my eyeballs on all his fingers. What I also do when I'm on the road is go to record shops, so I can't wait to go to Waterloo.

AC: That place is the best. There's another store you might like called Breakaway Records that has a good soul selection.

BW: I'll make sure someone takes me there. I also did a couple records back in the Nineties with Tom Russell. He's a great singer-songwriter and he introduced me to guys like Joe Ely and Jimmy Dale Gilmore and Butch Hancock – the Flatlanders. That was a great experience meeting those guys. So I've got a little Austin in my blood. I hope that some of the musicians who I was listening to back in the day show up for the show.

AC: How long has it been since you've played here?

BW: I want to say late Nineties, probably 1997. It's been a long time. It's been way too long. We've always had great success down there because we recorded some of Live Emulsify down there. Some songs were recorded in Houston and some at Liberty Lunch. That was one of our favorite places to play.

AC: The Savages were always big in Europe.

BW: Europe's always been wonderful for us, ever since the first time I set foot in England back in 1986 through a guy named Andy Kershaw, who was a deejay and a journalist for the BBC. He was a big fan and as the years went by we got some fans to come see us. One of the big fans I got to meet last year was Robert Plant.

AC: Why is it that the Savages had more popularity overseas than America? Is it European musical sensibilities?

BW: We had some success in the States, but going over to Europe, they just embraced us. To them I was this guy who could be the next Little Richard, screaming his guts out singing rock and roll – making people get up and dance and do crazy things. It was just the image that we brought over from the United States into places like Spain, Italy, France, and Scandinavia. It just wore them out.

We were over there in April. All these fans would come up and tell me, "I saw you 20 years ago." And it's fantastic because 20 years later, they're coming out to see the music and we didn't fail them a bit. They said it was just like 20 years ago. We've gotten a little older, of course, and a lot wiser, but we still know how to perform. And we know how to give off energy and how to sweat like pigs.

AC: I've always admired frontmen who have high energy onstage, but I wonder with you: is it a style of lead singer you're emulating or is it simply how you react to music?

BW: I think for me, it's just about going up on stage and having a good time – having fun and inviting the audience into my home for about 55 minutes. Let's rip off our clothes and go ape-crazy. Just lose it like my record Let's Lose It or the record Live Emulsify. Let's melt! You go to shows these days and it's all people posing. People will say, "Oh yeah I was at that show," and their body was there, but they weren't listening to the music. We just exude energy that demands your attention. You gotta move. You gotta feel it. It's just like going to church, going to gospel church.

AC: How many years were the Savages off?

BW: There's always been Savages. I've got a family tree of musicians that have played with me through the years, but getting together with Peter Greenberg and Phil Lanker last year was the first time that we had gotten together and played together in about 27 years.

AC: How did it feel?

BW: It was great, almost like we never left. We're resuming where we left off in 1986, and not only are we doing a lot of our old tunes, we also have new tunes. Peter and Phil brought new material and that old energy back. They said to me, "Barrence, you haven't changed. You've still got the wildness in you."

It's one of those things that I've never lost. I may have settled back for a while and not done much, but it was always in my mind that I was going to get back together with these guys. It was just about getting these guys together and having them buy into finishing a record and then going out there and socking it to 'em.

AC: Is there anything else you want to say to our readers?

BW: All I can say is Austin, Texas, here we come! Get real. Get right. Get savage. You will be for the two nights we're there.

SXSW In-Store: Barrence Whitfield & the Savages
Rock has lost its innocence and grit but not these Savages