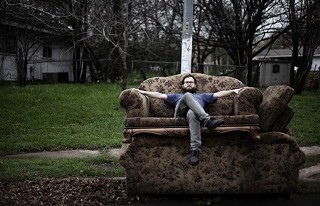 The line for Stubb’s inside stage on Friday night snaked all the way down the block and threatened to turn the corner. Was the mainstay Red River venue hosting a concert on the outdoor stage? Nope. It was the Eastern Sea's CD release show. And as it both appeared and later turned out, it also doubled as the locals' first sold-out performance.

Dana Falconberry was still tapping her boots onstage when I finally made it downstairs. Armed with an acoustic guitar and full band, she was sweet and simple as ever. The local favorite can take the stage solo or accompanied by a group and play with the same prowess and ease.

Her pared-down indie folk scripts lazy creeks and deep piney woods, Falconberry introducing selections from her January EP Though I Didn’t Call It Came. With songs like the stunning “Maple Leaf Red,” she held the crowd's attention comfortably, making the show a true double bill.

Afterward, the Eastern Sea popped onstage one by one, finally cramming onto the petite space eight strong, an apt parallel for the throng in front of the group. By the time the set started, bystanders poured out onto the the downstairs patio, hung over the balcony railings upstairs, and crowded around the stage TV by the bar. The band’s first local gig since April also acted as a tour send-off.

It was also the culmination of a tumultuous journey to the release of second full-length Plague. The weighty title manifests itself in the album's production, which faced one stumbling block after another on its way to the mint. It was a bittersweet night for those who knew the backstory.

The staccato notes of “Central Cemetary” launched the band into its set. Frontman Matt Hines received help from the front row, which knew every word to the selections from the Eastern Sea's debut LP. The band brought “This is Holburn” out of retirement, a blazing pop song that countered the darker, poetic selections from Plague.

Before launching into new material, Hines cleared the stage for his solo rendition of Bon Iver’s “Blood Bank,” perhaps an ode to Jeff Lipton, who mastered the tracks for Plague and has worked with the Grammy-winning folk hero. Pessimistic commentary on our national identity, “Plague” sent a haunting swell through the crowd as scripted by its climbing guitar riff slow rolling to an orchestral release.

Not all the Plague tunes were as dark as the title track. “Santa Rosa” began with frantic hand claps and lapsed into the ebb and flow of a joyous rock chop.

The AC unit I was positioned under flattened my hair to the scalp, but through the cold air roaring in my ears and a view between the gaps of shoulders, I stood mesmerized. This is just the beginning of a voyage for the Eastern Sea.

The Eastern Sea: Walking in the Air
Matt Hines gets high for the holidays