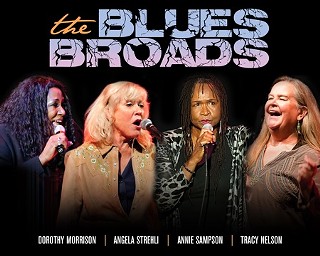 The collective experience of the Blues Broads will howl like the wind when Annie Sampson, Tracy Nelson, Angela Strehli, and Dorothy Morrison strut centerstage at Threadgill's WHQ on Sunday. They're armed with a new DVD, Live from the 142 Throckmorton Theatre, and of course power in numbers.

This isn’t the first rodeo for any these women. As the sweetheart of Chicago blues here in Austin, Strehli spent decades singing with local acts, including James Polk & the Brothers, Sunnyland, Angela & Lewis & the Rockets, and Southern Feeling. She was instrumental in the founding of Antone’s nightclub when it opened in 1975 on Sixth Street and crowned its namesake record label with a girl group that included Marcia Ball, Lou Ann Barton, and Sarah Brown.

We don’t hold it against Strehli that she fell in love and moved to Northern California, thriving there and encouraging a cross-pollination between Texas and Bay Area musicians that hadn’t been seen since the high days of Haight-Ashbury in the late Sixties. Small wonder she ended up in the good company of her fellow blueswomen.

Neither is Annie Sampson a stranger to the stage. Beside performing in the long-running stage production of Hair, her loaded vocals fronted S.F.’s killer funky blues-rock outfit Stoneground with Elvin Bishop and accompanied Taj Mahal, Buddy Miles, and Maria Muldaur. (Raise your hand if you remember when Stoneground’s Jo Baker and Sammy Piazza used to pop into Austin in the early Seventies and amp up the One Knite with the Nightcrawlers featuring Little Stevie Vaughan on guitar and Big Doyle Bramhall on drums.) Sampson's arrangement of “It’s All Over Now, Baby Blue” ought to make Bob Dylan stand on his chair applauding.

Tracy Nelson’s long history with Texas has its roots in another blues band, Mother Earth. Her sonorous, earthy voice has long been paired with other Texans too - Willie Nelson on “After the Fire is Gone” and Marcia Ball with Irma Thomas - but it’s her weeper “Down So Low” that’s so soul-baring that Etta James covered it. Nelson shines in the context of the Blues Broads, as if she missed her calling to be in a gospel group.

That’s the secret of the Blues Broads - they’re a gospel outfit in the guise of a blues vocal quartet. Go no further than Dorothy Morrison, whose showstopping arrangement of “River Deep Mountain High” is bested only by her performance of set closer “Oh Happy Day.” That’s Morrison featured on the original charting version by the Edwin Hawkins Singers, credentials as stellar as they come outside the secular world.

You sold yet? You should be. The Blues Broads isn’t just a homecoming for a beloved former resident or even and a supergroup. It’s the pure, unrestrained joy of voices joining together, something to sing about really.