Chingo Bling's back – at this weekend's Pachanga Fest Five years ago, when immigration rhetoric reached fever pitch, Houston rapper Chingo Bling stoked debate via They Can’t Deport Us All, his major label bow and the boldest move in a career that began with selling mixtapes out of his car. Pachanga Fest reveler Friday, May 11, he's no less guerrilla today.

“It’s all part of being human and being an artist,” he explains. “I’m a walking, talking contradiction, a dichotomy, a conundrum, a duality, bipolar, ADD.”

“I want to be like Warhol meets Kanye meets Cesar Chavez meets Russell Simmons. I don’t want to be strictly a musician. I want to be more of an idea.”

Despite an outlandish persona complete with ostrich boots, 10-gallon hat, and a cartoonishly-sized belt buckle, Bling started being taken seriously in 2006 when he inked an $80 million distribution deal with Asylum following a major label bidding war. After releasing a slew of mixtapes and singles through his independent Big Chile Enterprises, CB is once again the sole driver of his taco truck.

“We’re a lean mean machine. At the click of a button I can add a new title or song to iTunes,” he chuckles.

“You know what my record label is right now? American Express. They make sure that we have hotel rooms to stay in, there’s gas in the vehicle, that we’re fed, and that promotional items get paid for.

“My job is to generate some money to make sure they get some money back and we keep it moving.”

Beatbox
Feel the Boombox, A Tale of Two Midis, They Can't Deport Us All (Record Review) 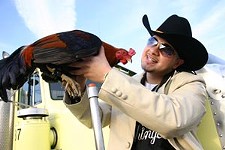