Tennis at its 2012 SXSW showcase (by Sandy Carson)

Alaina Moore and Patrick Riley marrying and then setting off on an eight-month voyage up the East Coast resulted in 2011 pop gem Cape Dory. No seafaring was involved in new sophomore CD Young and Old, but some tough love helped the couple on dry land. Moore, who leads the trio at the Parish Tuesday, spoke with us en route from San Diego to Phoenix.

Alaina Moore: Actually, this tour has been really, really fun. It's always nicer when it's spring. We toured all winter long, and returning to all of these cities but seeing them with blooming flowers and leaves on the trees makes it so much better.

AC: Your new album Young and Old was produced by Patrick Carney of the Black Keys. How did you hook up with him?

AM: We really admired his work for a long time, his producing and engineering the Black Keys' early catalog, which we're big fans of. So we just sent him an email. We had a contact at Fat Possum, but we had no expectations that he would get back to us.

A week after we emailed him, he called us while we were out riding our bikes. [My husband] Patrick pulled over to get on the phone, and he ended up walking away and being on the phone for 20 minutes. I'm just waiting there wondering who in the world it was. He came back smiling so big!

AM: It was very down to earth. He's a very hard worker, and he now has such a defined style. We just showed up at the studio and got right to it. We worked extremely well together. We really wanted someone with a third-person perspective that could help advise us in instances where my husband and I would differ creatively.

We felt there were times when we were falling into a rut stylistically or with structure, and those were the moments when we needed Carney to step in with a fresh perspective. It was exactly what we wanted.

We didn't want to reinvent ourselves. We wanted to mature it a little bit. So, we didn't feel like we were undergoing this overhaul of our sound. It just felt like he pushed us in the direction we wanted to go.

AC: What did you take away from working with him?

AM: One thing that was really helpful in collaborating with him was learning to trust my own instincts. At first I felt insecure about some of my creative differences. I was afraid he wouldn't like something that I wrote. I learned there are a lot of differences between a small band like us and a Grammy-award-winning songwriter.

When it comes to writing a pop song, it's some inequitable thing. That's the thing about pop music that is so amazing. Anyone could hit on that one chord progression or melody, and that made me feel a lot more confident.

That was the other amazing thing we brought away form that experience – learning to hear "no" or someone saying, "That's not right, try again." When you write alone, it's a very insular thing and you don't ever hear that. You don't have to deal with that. It was nice to have someone be super honest with us: "It's time to change this up, you're in a rut. It needs to be different.”

That was a harsh reality, but once we faced it, that got easier to hear and we could get better.

AC: What was it like, Young and Old versus Cape Dory, where all of the songs pulled from the same sailing trip?

AM: They're kind of drawing from the same things but from different places, so they feel very, very distinct to us, and we wanted to sustain that writing experience. Collaborating was definitely a new experience, and another was writing music for the sake of writing the songs and not for the sake of sharing an experience through the form of music. Those records feel so different to us personally.

AC: After a couple more U.S. dates you're heading to Europe. Have you toured much there?

AM: This will be our fourth time over in a year, actually. And I'm a terrified flyer! I hate international flights tremendously. I never would have anticipated that I'd be crossing the Atlantic Ocean so many times in a year.

AC: What's your most anticipated date on this tour?

AC: What about Texas is appealing for a performer?

AM: I love the vibe of any town not on a coast. I have two lump categories: There are major coastal cities, and then there's every other city that's not on the coast. They're all really different, but without a doubt there's a different vibe in a city that's not on the coast. Even if it's a culturally rich city, it feels totally different than a coastal city. I'm coming from Denver, and I feel like Texas compares to Colorado in that western feel. 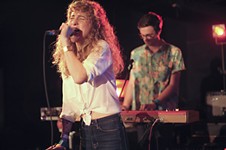