Decapitated, on first at Emo's, Tuesday, May 1

As detailed in the Chronicle at Thanksgiving, my path in Eastern Europe never quite crossed with that of Behemoth, which blitzed Poland on its 20th anniversary tour at the same time my girlfriend and I ventured to Kraków and Warsaw. That will be corrected, hopefully, this weekend when we travel to San Antonio for an autograph of our Polish Newsweek with Behemoth frontman Adam “Nergal” Darski on the cover.

Also primed for corrective measures is my rendezvous with Decapitated here in Austin next week. Not only did I miss the Polish death-metal technician's previous Emo's sweat lodge in 2010 – arriving for the last song thanks to an opening act dropping off the bill and the headlining slot being moved up. The day we flew to Budapest, our gateway to Poland, Decapitated played in San Antonio in support of its 2011 comeback, Carnival is Forever.

All this criss-crossing was pissing me off.

One week after we flew back from Warsaw, Decapitated returned to that same city – except the landing gear for the commercial Polish airliner the band was on didn't drop. The crashing-landing seen and reported here remains truly miraculous in that no one was hurt. Decapitated escaped tragedy where it hadn't before.

Founded by Waclaw "Vogg" Kieltyka (guitar) and younger brother Witold "Vitek" Kieltyka, Decapitated lost the latter drummer – and singer Adrian "Covan" Kowanek to serious injury –  when he was killed in a tour bus accident in 2007.

Asking Vogg about both incidents was certainly easier by email, but then the following exchange demonstrates why I've become enamored of all things Polish.

Austin Chronicle: Film director Krzysztof Kieslowski, Polish film posters, and especially Behemoth and Decapitated: All these things got my girlfriend Agnes (Agnieszka) and I to Poland last year. We LOVED it. Poles seemed surprised that we visited Poland. They said the Polish are a hard people, and maybe not the easiest to like even though we were treated like royalty. Does this sound familiar or was it simply tourist weirdness?

Vogg: Hey! For me, it’s not weird anymore that people from other countries are visiting Poland. Of course right now, it’s much easier to come here than 15 or 20 years ago. Poland was in a communist system and after we changed to a democracy, it was still hard to come here. That’s why Polish people can be surprised to meet someone from the U.S.A. or U.K. or other countries in their town. And right now it’s more natural to hear the English language here in Poland, especially in Krakow or Warsaw because so many tourists visit my country. Maybe for older people it’s weird to see different skin color or hear other languages. And also Polish people are very hospitable, so that’s why you can feel like a king here when you come from another country :)

AC: Polish metal bands – Decapitated, Vader, Hate. To me, there's something that sets these bands apart from other European metal acts. They seem much more no-nonsense for one. Can any generalization be made about Polish metal bands as a group?

V: I don’t know the reason. It’s because we’re from Poland. Poland has its own history, mentality, food, and air. Maybe we treat everything more serious than others.... Maybe we want to be the most extreme in metal?

AC: Carnival is Forever was by far THE metal album I played most in 2011. The acoustic parts were especially haunting. Was this an album that fell into place, or one that when the smoke cleared you were surprised by? The critical reception seemed universally ecstatic.

V: This time we had all the songs ready before recording, so we knew pretty much how it would sound before we started recording in the studio. Of course after recording began everything started to sound much more awesome. I’m very happy about this album. I think it’s very good in every way – good sound, good songs. I’m very satisfied. This was a good time in the studio as well: great atmosphere, nice people. Everything about this album I love.

AC: Your crash landing in Warsaw was blood curdling. That was exactly one week after we flew out of Warsaw. Given the tragedy of your brother's death, I assume that on some level touring is a life and death proposition for you now?

V: Yes, it’s a little like that. When I go on tour, I never know if maybe this will be my last time I see my home. You never know. Touring is always traveling. Every day you are in a van, train, nightliner, plane ... Shit happens. I have already escaped from death three times. This last time, I was really scared. I was almost sure that we would not make this landing without victims, but we had lot of luck. Mr. [Tadeusz] Wrona is a good fucking pilot!

AC: You've played Austin how many times? Any good stories from here, or in Texas in general?

V: I have a lot of good memories from Texas, but they are so good that I can’t talk about that! Always a good crowd, nice people, high temperature....

AC: Besides the Polish metal bands named herein, I didn't know what metal to buy (or where) when I was in Poland. I liked the Frontside CD I purchased because the vocals are in Polish. When you and Vitek were growing up, was American metal and music in general impossibly exotic?

V: American movies, music, and pop culture were everywhere in Poland. When I was young together with my brothers, we watched American movies and we were listening to American music all the time. I can say that even though I grew up in Poland, in one way, I grew up in the U.S.A. as well. We all lived in America! Heh heh. Cannibal Corpse, Rambo, Karate Kid, Wrangler Jeans, McDonalds, Metallica, Ace Ventura, Chuck Norris, BMX, Predator, Star Wars, 7-Up, Coca Cola.... It was always with me when I was a kid, together with Polish, Brazilian, and may others bands, movies, etc. So, NO. American Culture was never exotic for me :)

AC: Finally, how do you write “thank you” in Polish? Pronunciation seems to be “jink-wia.” 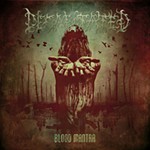