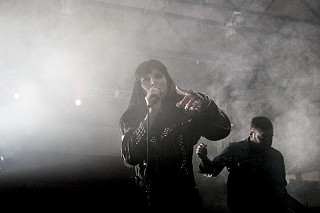 Formerly known as the Large Act Concert, a one-trick pony that's featured the Decemberists and Cake, Friday's 4/20 Clusterfest made the switch to a one-day mini-festival in 2011 when indie sweethearts Matt & Kim headlined. Armed with a snappier name and a winning inaugural line-up, student organizers aimed high for their second year in securing the aforementioned Brooklyn noise-pop duo.

A short shot up I-35, the small venue on Southwestern’s campus eliminated typical festival stress. The Black and White stages, sitting side-by-side in the Corbin J. Robertson Center, hosted the evening’s bigger acts, while singer-songwriters flocked to the Green stage outside. The 45-minute sets overlapped only 15 minutes, alleviating tough line-up choices and allowing for an easy crowd experience.

Numbers nearly doubled as Sleigh Bells' midnight set approached, meaning late comers had missed an Austin sampler of everything from Dream Shake’s alt-hip-hop to down-home stompers Whiskey Shivers. Mother Falcon filled the Black stage with 14 of its members and an orchestral grandiosity, while Suzanna Choffel put her sexy alto to work before shoving off back to NYC. Black Joe Lewis & the Honeybears rocked as hard as usual, dancing jams over blues mattes.

Baltimore synth pop trio Future Islands broke the string of locals, with frontman Samuel T. Herring’s guttural voice commanded the space as it bounced off walls and lingered with the keyboards. He moved about stage gesturing with sweaty ardor, melodrama that made for the perfect introduction to Sleigh Bells.

With new touring guitarist Jason Boyer in tow, Alexis Krauss burst onstage with partner in crime/guitarist Derek Miller. The set drew evenly from 2010’s Treats and this year’s Reign of Terror, catering to the crowd with favorites “Crown on the Ground” and “Rill Rill.” Krauss has built her stage presence into a practiced but thriving spectacle, a little contrived as far as antics – she knows exactly how to flip her hair so it falls back into place – but if the crowd’s territorial nature was any indication, Sleigh Bells gets people excited. Foregoing headlining privileges, Sleigh Bells stuck to the same 45-minute time constraints, exiting the stage for good after a two-song encore.

The UT vs. A&M football rivalry may have come to a close, but with Clusterfest situated annually around UT’s iconic 40 Acres Fest, a new competition has just begun to brew.