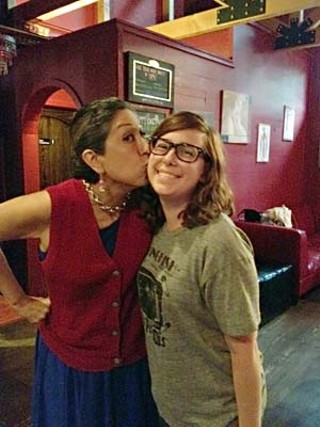 Alice Bag (l) and yours truly

If Austin's felt a little cooler recently, it isn’t just the weather. Alice Bag was in town. A punk legend, she's been touring her new book Violence Girl, which covers her bands the Bags, Cholita!, and Castration Squad, plus all that came before and after.

Yesterday Bag stopped in at Domy books for a reading, treating the crowd to a few acoustic songs as well. She even donned a balaclava in tribute to the imprisoned members of Pussy Riot and played a song she had just written for them.

Earlier today, I got to sit in on a women's luncheon with Bag hosted by MEOW (Musicians for Equal Opportunities for Women). A lot of the conversation focused on one aspect of Bag’s life that not many other women are willing to embrace: feminism. And a big part of being punk, for Bag, is being politically outspoken and feminist.

“Many people don’t realize the power they have onstage,” explained Bag. “When I was young, I got onstage as a punk rock musician and felt like, ‘I can create a movement, I am part of a movement,’ because punk empowered me. As I got older, I found my voice more, and now I focus on different groups, such as women’s rights, people of color, and queer rights.”

In the Seventies, the powerful push of punk was helping young people find their voices, but the movement's a lot more fragmented now. Bag had advice for young people in the music industry.

“Don’t be a perfectionist,” she stressed. “Sometimes it’s more important to make your voice heard than for it to be perfect. My friends and I spent too much time playing in our living room, thinking about how good we would be in the future. But don’t censor yourself – just get up there.”

Bag’s accompanying bandmate on this tour, Angie Skull, is also a proponent of carrying on the DIY lifestyle.

“Fear nothing, that’s my motto,” stated Skull. “Money is not the end all, be all. We are 50 years old and we are touring, sleeping on couches and floors. The only failure is not to try at all.”

It’s cool to hear stories from women like Bag and Skull and think about our own DIY ladies and industry folk here in Austin. I went to see the Melvins last night with my old friend Tessa Hunt, a local DIY booker and promoter. It's no longer 1977, but the spirit of punk was alive and well in our moshing. When I talk to her, as well as the many other young women who keep this scene running, I'm heartened to think that this is our generation of Alice Bags and Angie Skulls.

At one point during lunch, Bag turned to me.

“The most important thing for young women to know is that we're supporting them,” she said. “This is your world. Young women are taking the drivers seat. I just want them to know that we're all here for you.”