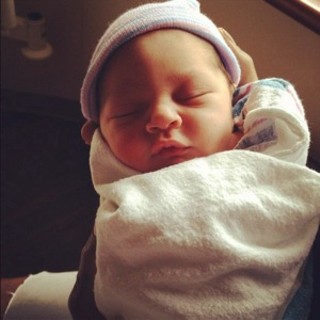 It’s one of those times where my expectations exceed my gratitude. Traci Lamar Hancock’s family posted a second tender but terse request, Harold McMillan was roughed up in Houston, and the fucker who ran down Slim Richey in February is still tooling around.

The problem with harboring ill will is that it eats at you, sapping your psychic energy. What happened to Harold McMillan of Austin's Diverse Arts two weeks ago incites just such ire.

As reported in this Thursday's Chronicle, McMillan journeyed to Houston's Memorial Hermann Hospital to collect the wallet of his recently deceased brother and ended up in an altercation with Houston Police Department over a mix-up of paperwork. Commented one blog at the Houston Press, “How utterly ridiculous of a guy who just lost his brother to show an inkling of frustration when dealing with a bureaucracy.”

Of course if McMillan chooses not to file a complaint with the HPD for what would be a costly round of hearings involving trips to and from Houston, then there’s no crime, right?

The “hit and run rat” who mowed down Richey on East Sixth Street in February was never identified. Although a friend offered a $1,000 reward on Facebook, I wish upon that driver unending nightmares. Luckily, says Richey as he preps for his Old Settler’s set on Thursday, “I'm playing gigs. I have medical and dental specialists lined up from here to Dallas to take care of my problems.

“We got enough money from our benefit contributions to pay for a new bass fiddle [for wife Francine Meaux Jeaux] and, if not pay for these specialists and current bills, at least keep the wolf away from the door.”

That’s what drummer Brian Lee Sebastian’s friends did this weekend with a silent auction and fundraiser at Wahoo's for the cancer survivor that's performed with Dave Alvin, the Killer Bees, Michael J. Smith, Los Super 7, Papa Mali, and Rick Trevino to name a very few.

Sebastian supplied hand percussion with James McMurtry – and somewhere there’s a halo for McMurtry, who so freely gives his talent to the right cause – at the show, which included Michael Ramos and his band Charanga Cakewalk, Johnny Goudie, Afrofreque, and Bustamoovalators. The benefit's over, obviously, but Brian’s page is open to donation.

The second update from the Hancocks carried all their usual warmth and charm amid a blunt message: times are “physically and financially challenging” for Traci Lamar Hancock, now in hospice. They have made 20% of their goal on her Traci for Grace Fund page.

With all of that, the spring has been beautiful and blessed us with wildflowers and blankets of bluebonnets, which has proved enough to flip the equation and make my gratitude higher than my expectations as Traci Lamar Hancock likes to say.

So here’s to Maya Phoenix Fawcett, born Sunday to Starla Simmons and Chronicle music writer Thomas Fawcett. We hope all her days are as beautiful as the one she came in on. 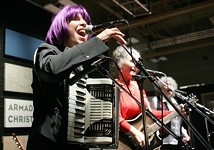 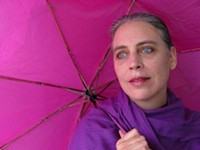