Wiki has no entry for pie socials 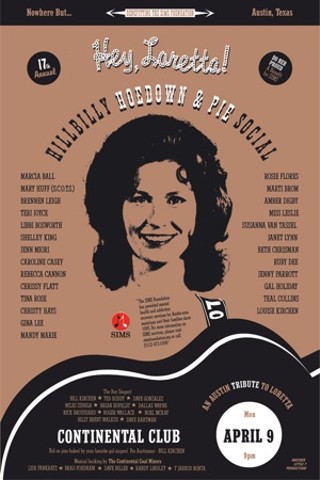 Given last night's all-star Hey, Loretta! Hillbilly Hoedown and Pie Social at the Continental Club, the proceeds of which benefited the SIMS Foundation, I looked up the history of pie socials to see how they developed. Finally! Something Wikipedia has no entry for!

It does have an entry for “pie supper,” linking it in that phrasing to the Ozarks, where such events were presented to raise money for local needs. The custom goes much deeper than the Ozarks though, found throughout the South in a variety of cultures and likely once descended from occasions intended for marriageable young men to meet marriageable young women.

Sounds like an arcane custom, but hey, at this point in my life, I’d certainly appreciate a little vetting in the romance department, especially from people we’d have to live around.

But if pie socials were intended to do good, Austin's annual Hey, Loretta! does so in heaping helpings since all “your favorite gal singers” have carried on this tradition for 17 years, baking pies for auction and then performing a tribute to one of country music’s grand ladies, Loretta Lynn. A slice of the talent, topped by the likes of Marcia Ball, Rosie Flores, Shelley King, Marti Brom, Libbi Bosworth, Brennen Leigh, Susanna Van Tassel, and many more, got out their rolling pins before getting onstage.

And how often do you get an evening of music and dessert the next day? How were those pies anyway?