Himes, 64, was born in California, but his father’s Army career kept the family stationed for many years in San Antonio at Fort Sam Houston. After graduating high school in the late Sixties and attending college in San Marcos, Himes joined Homer, the band that bridged psychedelia with nascent metal and set up the Alamo City as one of the country’s major hard rock markets for decades to come.

Austin Chronicle: How did you go from this-goes-to-11 with Homer to the softer sounds of Christopher Cross?

Chet Himes: I moved to Austin in 1972 along with Chris, Andy [Salmon], and Rob [Meurer] with the intent of recording Chris' music and for me to start a recording career. Chris, Rob, and myself had become friends in S.A. while playing in Homer and Flash. I heard a recording of Chris with Flash and I completely drawn to the music. I knew I wanted to work on it. It's a moment I still remember today.

We recorded demo tapes at Odyssey Sound/Pecan Street Studios from 1972 to 1979 and developed the Christopher Cross sound in the studio and at gigs. Chris didn't want anybody to hear what we were doing until we had a record deal, so everything was way underground. Christopher Cross was known as a great cover band with a great sound. We were all young and driven, with a common goal of doing the right thing for the music.

I was doing a lot of work with Michael Brovsky and FreeFlow Productions – Carole King, Joe Ely, Jerry Jeff Walker, Gary P. Nunn, Guy Clark, etc. – so we asked him to shop Christopher Cross to the major record labels. Michael secured a deal with Warner Bros. Records, our dream come true, and I had enough engineering credibility to be included in the deal.

Recording that record was a fantastic experience. We were at Warner Bros.’ Amigo Studios in L.A., one of the best studios in the world, and we were being given carte blanche. Amigo was one of first studios to have the 3M Digital Multi-track recorder. Ry Cooder had just done Bop Till You Drop there, the first pop album done digitally. We got to meet all the artists and producers on Warner Bros., and I got to meet all my engineering mentors like Lee Herschberg, Roger Nichols, Bill Putnam, Don Landee, and George Massenberg. It was a magical, fulfilling time that worked because we were doing it for the love of the music.

In 1984, I bought Warner Bros.' Amigo Studios from Warner and began updating and running the studios there in California. That lasted a couple of years successfully until I had conflicts with my partners over business direction. I took a leave of absence from full-time music in 1988 for [my wife] Kathleen [Vick] and myself to take care of my parents and their health issues in San Antonio. I was in and out of Austin, constantly working with various artists for Clifford Antone, and working with Eric Johnson on his Ah Via Musicom record.

I moved back to Austin full time and got sober in 1998. I started working with Stephen Bruton that same year, mixing Chris Smithers' Drive You Home Again. I worked mainly with Stephen until he passed away in 2009. He was truly one of my best friends. I worked with Stephen on his many Austin projects, including two Marcia Ball albums.

I'll be finishing post-production for a DVD of that in the next few months. I got the pleasure of re-mixing over 60 titles from the New West Records DVD/CD releases of the Austin City Limits TV series in 5.1 Surround Sound over the last few years. This is how I met Thomas Turner of Ghostland Observatory.

I'm building a new studio in Dripping Springs for a friend of Van Wilks’ and mine, Chuck Farmer. If all goes well, I plan on recording and mixing the new Malford Milligan Band and Barbara K projects, and mixing Cheryl Murdock. I'm also very excited about Jane Bryant, a beautiful and talented young songwriter and musician. I've had the pleasure of working with her for the last couple of years and feel very strongly about her and her music. Jane, Malford, Barbara, and all the artists I work with share the same love of music.

To me, the "Texas Sound" comes from our guitar players and their music. I've always been drawn to the sound of guitars and have been very fortunate to have known and worked with great ones. They're all different and so is their music, from Willie Nelson, Doug Sahm, Eric Johnson, Christopher Cross, David Grissom, Charlie and Will Sexton, Van Wilks and Billy Gibbons, to Guy Clark, Lyle Lovett, Jerry Jeff, Michael Martin Murphey on to Shawn Colvin, Patti Griffin, Carolyn Wonderland, Ruthie Foster and my new one, Jane Bryant. The music and song originates on guitar, and the styles are unique and their own.

All of them from or writing in Texas! 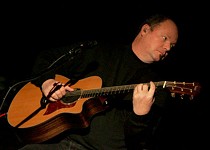