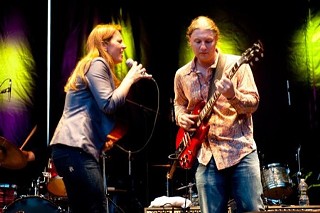 At 11 members including Austin’s J.J. Johnson on thunder beat, the Tedeschi Trucks Band rolls closer to an orchestra. Given everyone’s solo moment in the spotlight, last night’s concert at the Moody ran over two hours. At the center of it all was a married-with-kids couple rarely farther apart than four feet centerstage. Even so, it was mama bear's show.

Boston-born Susan Tedeschi, 41, has blossomed into the next Bonnie Raitt. Satiny Southern rasps as conversation-stopping as Tedeschi’s come but once a generation in modern blues and her piercing upper vocal registers summons no less than Threadgill's Janis Joplin. Yet it’s not who she sounds like, because mostly the mother of two channels Susan Tedeschi. Rather it’s the star confidence she’s gained fronting the Tedeschi Trucks big band. The glass slipper fits perfectly.

Opening with Fred Neil’s dopamine classic “Everybody’s Talkin’” and closing in an R&B whirlpool that included Stevie Wonder’s “Uptight (Everything’s Alright)” and Sly & the Family Stone’s “I Want to Take You Higher,” the TTD summoned all the great Sixties/Seventies roots rock & roll juggernauts from Joe Cocker’s Mad Dogs & Englishmen to the Chicago Transit Authority. At the fore, the single female onstage gave it all a diamond laser pinpoint. The room held its breath when “Everybody’s Talkin’” did all the conversing necessary.

Most telling, though, was the way Tedeschi looked at her husband throughout the evening. First guitarist Derek Trucks mostly keeps his eyes on his trademark red Gibson SG and plastic finger tube sliding up and down the neck of his instrument like a motor speedway drag race. He’d lean over to Tedeschi and nudge her back to the microphone after an extended musical passage from the band. He’s the bandleader, make no mistake. But the way Tedeschi would catch his eye after yet another one of his barn-burning solos was pure love. Trucks didn’t let another musician solo until 45 minutes in, yet the moment he finished turning “Midnight in Harlem” from TTB’s 2011 debut Revelator into a Clapton-meets-Allman epic, she could barely contain her pride and joy. Can there be a better couple in rock & roll?

The second hour stutter-stepped somewhat with every musician talking lead at some point, drummer Johnson typically powerhouse and negating the need for TTB’s second percussionist, while bassist Oteil Burbridge put on a four-string tour de force and keyboardist brother Kofi Burbridge pulled off a flute solo recalling the glory years of Hubert Laws. Nevertheless, the question of why Tedeschi and Trucks hadn’t joined musical forces earlier in their union was an obvious one. Tedeschi’s the best singer Trucks could ever hope to back after Gregg Allman, and the guitarist is all the band a frontwoman could dream for.

Heavy D & the Boyz once asked, “Now that we found love what are we going to do with it?” This, TTD. 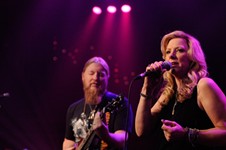 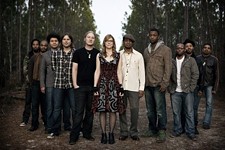