The Yeah Yeah Yeahs and others aid Jonathan Toubin 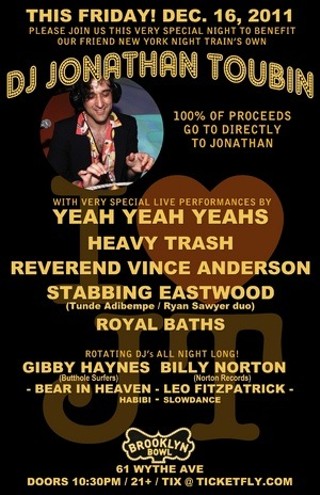 My old pal and former Noodle bandmate Jonathan Toubin remains in ICU at a Portland, Ore., hospital, recovering from serious injuries sustained when a taxicab crashed into his hotel room Dec. 8.

The New York Night Train DJ and ex-Austinite, known far and wide for his scintillating “Soul Clap” R&B record hops, was in Portland for a gig. They say you find out who your true friends are in a crisis, and Toubin has many.

Starting last Friday night at his Motor City Bar home base in New York, a remarkable series of benefit shows kicked off to help defray Toubin’s medical expenses. Now word arrives that the Yeah Yeah Yeahs, Jon Spencer’s Heavy Trash, and TV on the Radio side project Stabbing Eastward are headlining a benefit for Toubin at Brooklyn Bowl tonight. Butthole Surfer Gibby Haynes will DJ between sets. Additional benefits are slated this weekend in Los Angeles, Portland, and Houston.

Back here in Austin, last Friday’s Clutters/Starlings, TN show at the Longbranch Inn became a de facto benefit when organizers decided to donate half the door to Toubin. Then came Sunday’s benefit record hop at Spiderhouse Ballroom organized by Knife in the Water’s Aaron Blount and the Chronicle's Mark Fagan, who served time as Noodle bassist 1992-1994. Mark and I kicked things off with a ham-fisted smattering of local 45s from the 1990s, including the Toubin guitar-solo-enhanced Hamicks single, “X-Ray Eyes.”

All of this leads up to the Dec. 27 Toubin benefit at Emo’s, when Knife in the Water and Glorium co-headline during the club’s final week on Red River. December Boys, the Black, and Quin Galavis also perform. Given Toubin’s near-constant presence at Emo’s during its early days, this is sure to be a poignant night. Toubin, whose earliest foray into benefits was spearheading a marathon punk rock show in Houston at age 15 to support the anti-nuclear war club at our high school, will undoubtedly be blown away by the far-reaching show of support.

“The Toubin family is so grateful for the love and support of everyone at this emotional time,” his family said in a statement earlier this week. “Jonathan is still in critical condition and needs your positive thoughts and prayers for a quick recovery. Please keep your love and energy flowing.”

The just-launched website iheartjt.com is a clearinghouse for information on all things related to Toubin’s recovery. You can make a donation, listen to some killer mixes or rare R&B singles, learn about upcoming benefit shows, or send in a private get-well video. Snail mail – other than flowers or perishables – can be sent to:

Jonathan Toubin Returns to Austin
Call it a comeback. And a miraculous one.