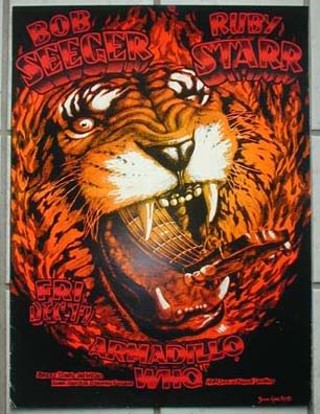 Back in April at the Austin Record Convention, I stumbled across a long out-of-print compact disc of Bob Seger’s long out-of-print debut album, 1969’s Ramblin’ Gamblin’ Man, a heavy, psychedelic soul affair. Since then, it's been a Bob Seger year for me, including a show in Pittsburgh last month, and come Saturday, another in Dallas.

Dallas 2007 was the site of my first Seger show, the Detroit rocker having ended a decade-long absence from the music rat race (to raise his children) with the previous year’s comeback, Face to Promise. At the time, the 2006 long-player sounded like a return to form, and when Seger and his Silver Bullet Band pulled out its calling card “Real Mean Bottle” in Pittsburgh the week before Thanksgiving – “a song Vince Gill wrote about Merle Haggard,” announced the singer – the boomerang effect was a welcome one. Revisiting Face the Promise today uncovers its shaky sea legs, but just this month, Seger revealed to Rolling Stone that he expects to deliver a new album next year, no doubt followed by another tour.

That’s good news seeing as Seger, 66, intimated on more than one occasion that this current trek could be his last. If that were the case, he’d be going out on top. Last tour, Face the Promise threaded the set-list. This time it’s the 2-CD Ultimate Hits: Rock & Roll Never Forgets, not to mention two essential Seger reissues that came out earlier this year, live bookends Live Bullet (1976) and Nine Tonight (1981).

While Ultimate Hits replaces the two volumes of Seger’s already existent greatest hits and the first disc of the new collection segues a flawless flow of classic rock standards, its second CD bottoms out midway through on the electroclash production of Beverly Hill Cop 2 theme “Shakedown.” Both live discs could use more than a single bonus track apiece, but Nine Tonight’s add-on, “Brave Strangers,” reminds hardcore fans that 1978’s Stranger in Town might best the better known Night Moves two years earlier. That’s “Hollywood Nights,” “Still the Same,” “Old Time Rock and Roll,” “Feel Like a Number,” and “We’ve Got Tonight” versus “Rock and Roll Never Forgets,” “Night Moves,” “The Fire Down Below,” “Sunspot Baby,” “Mainstreet” and “Come to Poppa.” Call it a draw maybe. In those back-to-back stunners resides more than half of Seger’s radio landmarks.

Up in steel town, Pittsburgh, Pa., Seger & the Silver Bullet Band rifled through most of those hits and myriad more during a 90-minute main set, throwing in the frontman’s contribution to the A Very Special Christmas compilations, “Little Drummer Boy” (“It’s Christmastime – almost,” hooted Seger), and Little Richard cover “Hey Hey Hey Hey (Going Back to Birmingham),” both on Ultimate Hits. Two guitarists, two keyboardists, three back-up singers, a four-piece horn section, and a rhythm section again starring Grand Funk Railroad drummer Don Brewer did most of the heavy lifting, and where Clarence Clemons has departed Springsteen’s band, Alto Reed still blows a real mean horn for the Silver Bullet Band. Yet when Seger sat at the front of the stage with an acoustic guitar for “Mainstreet” and second encore “Night Moves,” indeed the night moved. Better still was Seger caressing the piano on “We’ve Got Tonight” and “Turn the Page.” Best of all: Seger delivering the line, “I’m older now but I’m still running against the wind” in “Against the Wind.”

With all that I’d still gone to both Seger shows and now again to the American Airline Center this Saturday to hear one song and one song only. Six of Seger’s first seven LPs remain long out-of-print (attention reissues dept.), but with 1975’s Beautiful Loser the Bob Seger we all know and sing along to came online and followed it with the heart of his hit-encrusted catalog: Live Bullet (1976), Night Moves (1976), Stranger in Town (1978), Against the Wind (1980), Nine Tonight (1981). “Beautiful Loser,” segued out of “Travelin’ Man” since Live Bullet – that’s the one, with its melancholic melody and lyric:

Beautiful loser
Where you gonna fall?
When you realize
You just can’t have it all

Year-end holidays teach us that not only can’t we have it all, but that we should all eschew such thinking in favor of helping those that have so much less than many of us. As long as Bob Seger’s alive and smiling through every song in his set as though it were his last song sung – and crooning “Beautiful Loser” – let us all be grateful for what we have and the music miracles still walking this earth. 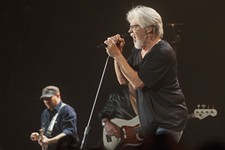 Bob Seger & the Silver Bullet Band Say Goodbye at the Erwin Center
Final tour, sure, but “We’ve Got Tonight”