Freddie King & the Faces/Small Faces make the Hall of Fame 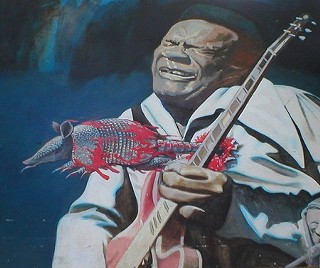 Either the Rock and Roll Hall of Fame got two out of five or we did. Freddie King in as “early influence” makes three. Inductees, for Pearl Harbor Day: Beastie Boys, Donovan, GNR, Laura Nyro, Red Hot Chili Peppers, and Small Faces/Faces.

The Faces/Small Faces nod means Austin's Ian McLagan – the mainstay of both UK essentials – must now be addressed as Sir. According to Rolling Stone, he's “warming” to the idea.

Chances are t-shirts bearing the work of local poster icon Jim Franklin's – an armadillo bursting through the chest of Freddie King – won't be available in the Rock and Roll Hall of Fame gift shop, which is otherwise pretty sweet. Fortunately, you can go see the real thing – the big ol' hunk of the Armadillo World Headquarters the image was painted on – simply by walking through the doors of Threadgill's on Riverside Drive and looking up.