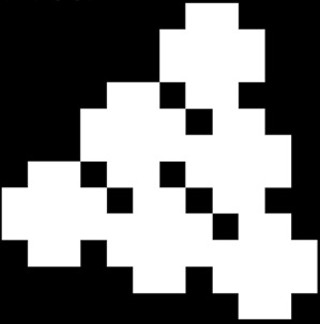 The email came hours after we spoke. I'd ended by asking BLACKIE for a photo to run with his interview. “Hey dude can you use this?” he wrote. "I can send you an actual picture, but I'd prefer you to use this image." The image, six white crosses in a triangle on a black background, was cover art for BLACKIE's Oct. debut, True Spirit & Not Giving A Fuck.

If "Not Giving a Fuck" means subbing publicity photos for black and white abstract art, BLACKIE is the Truest Spirit of them all. As was made obvious through our conversation, the Houston rapper (born Michael LaCour) cares about little else besides bringing to fruition the music he's been hearing in his head since he was 16.

Austin Chronicle: One of the first things that struck me when I heard you were performing at Fun Fun Fun Fest was that you likely won't have the option of setting up your own PA system.

BLACKIE: Yeah, I've been thinking about it. [Pause] I don't really play onstage much. A lot of my performances are based on how I feel at the moment, and a lot of times I don't feel very good. That's why I'm always rolling on the floor or doing strange shit. I don't really like being the center of attention.

AC: What do you enjoy about performing?

B: I like performing in the sense that I like expressing myself, but as far as people watching me, or needing attention or trying to pretend to be something — I don't need that shit at all. That's not why I do any of this. I do it to feel free, and I've played in empty venues and empty spaces.

I'm very aggressive and wild, I guess, but I manage to suppress that a lot - especially the older I get. When I was younger I was acting a fool, but I'm able to suppress that shit. When I perform, it's almost nostalgic. It's like, “Yeah, this is what I used to do.” I used to fuck my house up or be in school and fuck the school up. I think that's why I like performing.

I don't like being in front of people. I have trouble talking to people, and shit like that. Even my friends or whatever: It's hard for me to interact with people and shit. I'd rather play a show than go to a party or do any type of social shit. I'm not active. Like, I've only been outside once today. I stay to myself.

B: I feel more like I can do the type of shit that I want to do. It feels a lot better to be playing than to be out and hanging out with people.

AC: Is there a difference between Michael LaCour and BLACKIE beyond the fact that BLACKIE is a more identifiable stage name?

B: No, I don't think so. BLACKIE is like a band, a noise band or a punk band, but it's pretty much all I do. I separate it in my mind sometimes, but it's really no separation.

AC: Because it's how you spend your time?

AC: What did you do today?

AC: Do you enjoy spending time by yourself?

B: It's hard to say. Sometimes it sucks. Sometimes you get mad and think, “What the fuck is wrong with me?” I tried to hang out with some people yesterday and go to this black pride art anarchy thing here in Houston, and I just wanted to come back home. I didn't even want to be around all my friends. It's also because I just got off this tour. I go through weird phases where I just don't want to be around anybody.

B: I've toured enough now that I have friends in lots of places. I forget that they're there, you know? Like, I get used to being around the people I know. No offense to the people I know, they're my friends, but you see them so much that's it's like, “Fuck.” I was in Atlanta and saw some friends that I forgot I had. It made me so happy to see them.

AC: At what point is your music a marriage of hip-hop and punk?

B: I've been trying to do this shit since I was 16, or whatever. I'd been making beats that I wanted to put into a punk song, and I'd speed the beats up and it wouldn't sound right. I think it's more like a time thing. I've been trying to do this since I was a fucking teenager, and now I'm 24. That's a long time to be thinking and learning about how I want it to be made.

I'd hang out with these kids and we'd listen to Black Flag, and then I'd go hang out with these other kids and we'd be smoking weed and listening to Cypress Hill. That was when I was young. Now, after spending all this time traveling and being transient and in between all these sounds, there's no division anymore. I'm not thinking about anything when I make the music; that's the goal. The goal is to not think. I don't even want to remember what I did or how I made it or anything about it.

AC: Are you starting to realize your vision better?

AC: What did you do to make that happen?

B: It's just time. You have to spend a lot of time. I found this sheet talking about the 40,000 Hour Rule. You gotta spend 40,000 hours doing something before you become a master at it. I spend more time making beats than doing anything, but it's weird to talk about. I don't think words do it justice to how much time I spend doing this shit. Some people pretend that they work on something a lot, like, “I'm a producer” and shit, but I really did it. I fucking sat in one room for days, didn't eat and lost 20 pounds, programming some stupid ass shit just to make it sound cool.

AC: How much time do you spend on your lyrics?

B: Lyrics right now are crazy, too. I feel like I've mastered beats, and that's good, because I spent so much time on them. I got a handle on how that shakes down.

For me, I don't care about rap that much. It's cool, but the way I make the beats is that I try to make them hard to rap over on purpose so that it forces me to rap in different ways. I can't just jump on a beat and let the pattern happen the way it's supposed to, because I've fucked the beats up so much that it's hard to fucking rap on. It takes a lot more work for me to rap.

AC: Do you identify more with the punk crowd or the hip-hop crowd?

B: I don't really hang out with nobody. At first it used to bum me out. Like rap kids wouldn't understand the clothes I'm wearing, so I'd hang out with these punk kids, and they just wanted to do drugs and stuff that punk kids want to do. I don't fit in with anybody, but I think that's good. I think about islands and shit. Islands have the wildest wildlife because they're out on their own and isolated. They can do weird shit. I try to isolate myself.