When the Whip Comes Down

‘Some Girls Live in Texas,’ ravished by the Rolling Stones 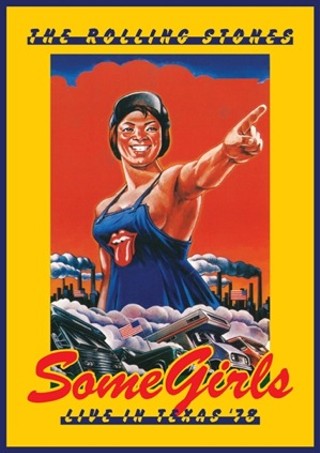 “If the band’s a bit off tonight, it’s because we spent all our energy last night... fucking.” Mick Jagger leading the Rolling Stones through a July 18 performance in Fort Worth on 1978’s Some Girls tour, a DVD tie-in to the LP’s new deluxe reissue and screening one-night-only in Austin yesterday, is a bit off alright. Off the charts.

Last year’s roll out of Ladies & Gentlemen the Rolling Stones, a 1973 concert film capturing the Fort Worth stop of the previous year’s Exile on Main Street tour, followed the now-standard limited theatrical run for contemporary rock & roll docs. Some Girls Live in Texas, due as a stand-alone release Nov. 21, has at least one skinny pant leg up on its predecessor: It’s never been seen or released. When the music business talks about a band’s “vaults,” this is what everyone’s holding their breath for.

In fact, the 7:30pm screening last night in South Austin at the Metropolitan 14 brought out a full-house. Nearly two hours later, after a new introductory interview with Sir Mick (a device employed with the restored Ladies & Gentlemen) and the Stones then steamrolling a 16-song set, KUT jock and forever Chronicle Music team player Jay Trachtenberg put it best. “I’m exhausted and it was only a film!”

Bootlegs from the 24-date '78 tour – imagine, less than a month of U.S. shows for a No. 1 album – reveal the same number of songs in 80 minutes, the hit list more or less set in stone other than the subbing in and out of covers. (Locate the Capital Theatre/Passiac, New Jersey, show. It’ll melt your stereo.) Fortunately, the heart of the performances starred eight of 10 Some Girls tracks. Only the title cut and Keith Richards’ post-heroin-bust boast, “Before They Make Me Run,” didn’t make the cut. The band actually pulled out the former tune during its 2002/03 Live Licks tour, while the latter later became a favorite of the band’s.

Framed by Chuck Berry covers, opener “Let It Rock” and main set closer “Sweet Little Sixteen,” the show’s ferociously punkish punch owes much of its raw edge to the band’s seminal influence. At every turn, Richards tears off lead runs beginning and ending at Berry, whose 85th birthday was yesterday, appropriately enough. Otherwise, Ronnie Wood fires most of the lead guitar work, starting with his ripping slide work on “Let It Rock” successor “All Down the Line.” He also becomes Mick’s onstage whipping boy, enduring all sorts of show hazing and harassment from the frontman. Unperturbed, Woody duets with Jagger on “Star Star,” wafts pedal steel on country bumpkin “Far Away Eyes,” and fights off the singer during Richards’ “Happy.”

Glimpsed only briefly but carrying “Miss You” with demonic keyboard funk is local British Invasion icon Ian McLagan, while Charlie Watts, who’s always driven the Stones like god’s own Transportation Secretary, gets exactly two close-ups during the two-song encore, “Brown Sugar” and “Jumping Jack Flash.” No matter. This is Jagger’s show all down the line. As the posters for Ladies & Gentleman proclaimed, “Jagges sings! Jagger dances! Jagger explodes! Jagger delivers the 15 hits that shook the world of music.” Six years after the Exile trek, the only thing that’s changed are the cloths and an additional song.

Some Girls remains the Rolling Stones last great studio album, its 1981 commercial topper Tattoo You scraped together from the vault with new additions. “When the Whip Comes Down” matches Let It Bleed’s vicious “Midnight Rambler” in beatdown even as “Beast of Burden,” delivered by Jagger here like he’s making up his plea on the spot, soothes the band’s savage beasts. Temptations cover “Just My Imagination (Running Away with Me),” whose expletive punchline burst the theater into laughter, grooves perfectly out of “Miss You,” whereas “Shattered” and “Respectable” froth back-to-back. “Far Away Eyes” into Robert Johnson’s “Love in Vain” mines American roots like the pioneers.

Some Girls Live in Texas, just how we like ‘em.