Live review of Blondie at the Moody 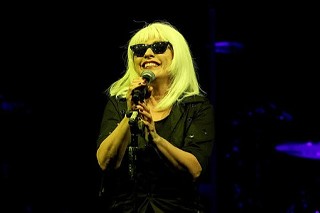 Blondie herself, Deborah Harry, leading the punk pioneers at the Moody Theater, 9.29.11 (by Gary Miller)

At 66, Deborah Harry’s siren call wafts as hypnotic it did in 1976, when Blondie’s eponymous debut led that year’s CBGBs class along with the Ramones’ self-titled bow. Born in Miami and raised in New Jersey, the singer still courses a hot-n-cool coo, flowing like the Gulf Stream with just enough street snarl. Last night at the Moody, Harry left her mark again.

Powered by her freshman class punk peers, original Blondie bandmembers Clem Burke and Chris Stein, the latter of whom Harry was partnered with for decades, the current sextet delivered a lean, mean, 65-minute main set for a Theater whose seemingly anemic audience swelled to Liberty Lunch overflow proportions the minute the lights went out promptly at 9pm. Attired all in black on a bare stage with stately white wall hangings behind them, Blondie 2011 could have been Jack Skellington’s wedding band.

“Crazy Texans,” nodded Harry after the opening triptych. “Great to be here, Austin. We have a long tradition in this town.”

“Debbie don’t you dare” used to say her mother, but in new Panic of Girls LP lead-off “D-Day,” Blondie’s storming pop lands on the “Day of the Deb,” Burke leading the attack like General Douglas MacArthur. With Burke behind the drums there’s few things a live rock band can’t overcome. This was also the point where Harry took charge, launching “Call Me” with all the slick drive of its sponsoring 1980 film hit, Paul Shrader’s American Gigolo. The following heart of the set explored Panic of Girls, as winningly contemporary as anything half its age. “Love Doesn’t Frighten Me,” “What I Heard,” “China Shoes,” “Wipe My Sweat Off,” and new highlight “Mother” (Bjork does Yoko Ono?) hosted “Maria” from 1999 revival No Exit.

Rap landmark “Rapture,” one of Blondie’s three No. 1 smashes along with “Call Me” and first encore “The Tide is High,” cover of a 1967 Jamaican rocksteady hit, touched off ‘77-style fireworks, seguing into a powerhouse arena moment with the Beastie Boys’ “Fight for Your Right (To Party!)” that toppled into the jagged, take-no-prisoners adrenaline of “One Way or Another.”

“Such a great music town,” smiled Harry, returning for a three-song encore that peaked instantaneously with an aching run through Johnny Thunders anthem “You Can’t Put Your Arms Around a Memory.” “The Tide is High” and closer “Heart of Glass,” whose light show found the mirrored ball high above the stage, sent the buzzing house into a warm, windswept night.

Mama Deb and Richard Hell, performing days apart in Austin on the week that its CBGBs – Emo’s – announced its original location's closure, rammed home a bedrock/punk rock bottom line: Pioneers make a venue, not four walls and a disco ball.