Tramp On Your Street 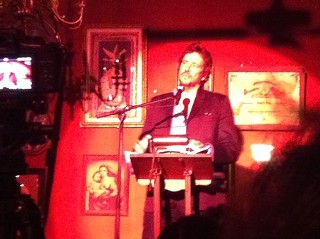 Carefully conceived by Hell, with local assistance from author Jim Lewis, the stormy evening celebrated word culture with DIY verve. Ground zero of New York’s 1970s punk explosion through his bands Television, the Heartbreakers, and Richard Hell & the Voidoids, whose 1977 call-to-arms “Blank Generation” remains an era-defining anthem, the 61-year-old former bassist and singer enlisted four openers. Having mostly given up music in the mid 1980s, the two-time novelist, poet, essayist, and cineast has now been an acclaimed writer longer than a practicing musician, though he obviously still remembers how to stack a bill.

Editor of art mag Wet Paint and young local musico Max Tolleson, Friday Night Light’s Dana Wheeler-Nicholson, Mistress Stephanie Stephens minus her Melodic Cat, and Brooklyn wordsmith Jardine Libraire warmed up the hip enclave with passages from authors of Hell’s choosing. East Village street poet Tom Veitch (“Cats Climb Trees”), Naked Lunch precursor Denton Welch (1943 chocolate morsel Maiden Voyage: “I was eating Mrs. Wright. Not for love but for hate, so that later she should be ejected from my body”...), American poet Bill Knot (“your clitoris is my boyfriend”), and 1800s French romantic Gérard de Nerval (“our dreams are a second life”) all offered their own unique payoffs. If the evening had ended there, it would've been as rich as Justine’s pâtés and cheeses.

After a brief intermission, Hell came on and read five passages from his tentatively-titled I Dreamed I Was a Very Clean Tramp. Clocking in at just under 50 minutes, their collective impact proved that Hell’s “last five, six years” of dredging up his musical past, an endeavor he put in terms including “horrible,” “depressing,” “complicated,” “humiliating,” and “mortifying,” wasn’t in vain. Funny, ecstatic, historic, depraved, revealing, Hell hit all the bases, beginning with Television’s first rehearsals (“It was like creating the world”), CBGBs’ early days (“sticking a needle in my arm felt adult, more independent than any choice I’d ever made”), Pere Ubu and Rocket From the Tombs drug casualty Peter Laughner (“so pure and so tainted”), cocaine nights (“under cocaine my brain and cock were the same”), and his road to addiction recovery in 1983.

When it over, just before 11pm, everyone had been rocked. No encore was necessary.

“I belong to the blank generation and
I can take it or leave it each time.”

Take it baby. Well worth the ride. 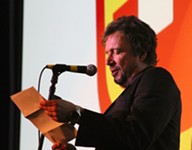