Manu Chao on Sunday at Zilker Park (by Gary Miller)

Comparing Manu Chao’s current quartet to the Clash might constitute punk rock heresy to the mohawk set, but a trawl through the Chronicle archives reveals the comparison time and again (and again) from the Spaniard’s U.S. publicist – me.

First time I heard Chao’s Parisian punk band Mano Negra the parallels were obvious – to the Pogues as well, and today, Gogol Bordello: roots-punk. When I finally saw Chao live at C3 Presents’ 2006 Lollapalooza in Chicago, the tiny revolutionary proved the point as if storming the Bastille.

Once his alliance to the local show promoter brought him to Stubb’s the following year, we sat together backstage discussing musical, social, and global politiks. Finally in 2008, he sold out Stubb’s again, taped Austin City Limits while making his ACL Music Fest debut, and promised to return to Austin.

On Sunday in Zilker Park for ACL 2011, he did. By 6:30pm, when he commanded the AMD stage, the weekend had well and truly peaked. Thirty-seven acts in 26 hours over three days yielded me what OTR this week rightly calls “an embarrassment of riches.”

Friday, Cults confirmed its buzz, Brandi Carlisle and her drummer left a mark, Big Boi killed it Outkast-style on the big stage, Kurt Vile shred J Mascis into Jerry Garcia, and Charles Bradley might as well have been slaying the Apollo.

At 10, foot-crippled hours, Saturday in the Park mostly blurs together except for the brain-seared bookends. A picture of Aloe Blacc in the Chronicle’s festival supplement – prompted by Thomas Fawcett’s blurb – returned me to the Big Boi stage first thing that day, and praise Jah it did. Remember Raphael Saadiq’s local breakthrough on an ACL stage two years ago? Ditto Blacc. A second LP under his alias, new Stones Throw disc Good Things – purchased at the Waterloo Records tent at ACL – pales next to Saadiq’s last two albums, but Blacc’s smooth, sanctified soul grows on you like hair. Opener “I Need a Dollar” hooks one of 2011’s best bargains.

Stevie Wonder on that same stage to end the evening defies words. (Not that that’s ever stopped my kind.) Complaints abound about the sound, but my girlfriend Agnes got me to do something I’d not done at ACL since Al Green the second year, 2003: seek out the headliner.

Last year I “watched” the Eagles from a vantage point that didn’t even afford me a view of the backend of the crowd. This year, I could have thrown a 30-yard pass to Stevie onstage. We heard the entire show through his monitors practically. On less than 24 hours notice, I’d materialized a ticket to Wonder’s comeback tour stop in Houston, 2007, but Saturday night in Zilker reached an altogether “Higher Ground” thanks to its local proximity and intimacy for us personally. Even so, Stevie Wonder holds the No. 2 spot on my ACL 2011 hit list.

Manu Chao Sunday brought the mosh to a massive gathering, but at an hour-long festival set, he and his band of musical Navy SEALs barely had time to draw blood. At the point of encore, they almost had to drag the five-foot frontman off the AMD stage. In fact, the bloodletting had been prepped by a two-and-a-half tour de force at Stubb’s Friday night.

That performance tallied my sixth Chao concert in five years, and while not substantially different from the previous five, I’ve never experienced a physical possession the way I did Friday. Only late, great, Cajun dynamo Beau Jocque (1953-1999) in New Orleans at Jazz Fest shook me out so utterly and completely.

Perhaps it was Chao streamlining his multinational crew down to a foursome, longtime bassist and show barker/exhorter Jean-Michel Dercourt, longtime futbolista-looking-guitarist Madjid Fahem, and what I suspect is the new secret ingredient, Mano Negra drummer Philippe Teboul. “Garbancito,” as the beater’s nicknamed, held down percussion in Chao’s previous few live groupings, but in the hot seat, he drives the band as if by meat cleaver – fast, choppy, brutal.

But it was in the early mash-up of Chao touchstone “Mr. Bobby” (Marley), the South American sway of “Clandestino,” and Bob Marley’s “Iron Lion Zion” that the Latin icon achieved true greatness, his patented back and forth between reggae and punk feeding off itself from its reptilian fangs to its whip-snaking tail. As Chao, Dercourt, and Fahem stepped forward and back in a line, my Clash flashbacks began, and in the singer’s pounding the mic against his bare chest in salute to his fan frenzy out front (a return to which at ACL finally broke skin), Joe Strummer rolled over and sat up.

The Clash, which I witnessed at 16 in San Francisco, happens once a generation if humanity’s lucky. As Manu Chao chanted “blood and fire” near the end of his Stubb’s sundering, lightning struck twice in my lifetime. 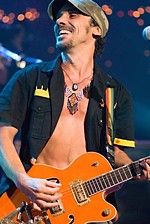