Bon Iver brings back the slow jam at the Long Center

With 2007 debut For Emma, Forever Ago, Justin Vernon introduced Bon Iver as a hinterlands poet, locked in winter contemplation and pouring his heartbreak into some of the decade’s most poignant ballads. He then spent the last three years – and the majority of last night’s sold-out show at the Long Center for the Performing Arts – defying that notion.

It’s been an interesting transition for Vernon, starting with the experimental pop of Volcano Choir, a one-off side collaboration with Collection of Colonies of Bees that produced the 2009 sleeper Unmap. He made a few cameos on Kanye West’s My Beautiful Dark Twisted Fantasy and toured with the slow jam collective Gayngs.

“Me and Kathleen did not have a secret conversation about filling this opera hall with so many fuck words,” said Vernon, breaking character early after a perfectly unprompted string of vulgarities.

Canadian songstress Kathleen Edwards, Vernon’s prairie home companion and tour support, complimented the headliner with frosted indie folk, a point made clear in the Bon Iver-produced new single “Wapusk,” named after the area in Manitoba where it was written. So where was the live duet between the two?

Vernon entered what should be Austin’s most prestigious concert hall with an eight-piece, post-rock orchestra that drove the opening couplet of “Perth” and “Minnesota, WI” with a cataclysmic force normally reserved for Mogwai and Explosions in the Sky. The band worked through latest Bon Iver, Bon Iver nearly in its entirety, enveloping Vernon’s uncanny tenor in swells of moody, baroque orchestration and unsettling ethereality.

In that regard, the evening was oddly reminiscent of Peter Gabriel’s New Blood Orchestra. (Vernon’s been known to cover the former Genesis provocateur on occasion.) Both artists take a more avant-garde approach to 1980s pop and boast falsettos that can fog up a windshield. That parallel was driven home by set closer “Beth/Rest,” which took Vocoder R&B to a stadium level.

Other highlights included a solo reading of “Re: Stacks,” the emergency room urgency of “Blood Bank,” and a startling cover of Bjork’s a cappella pop piece “Who Is It (Carry My Joy on the Left, Carry My Pain on the Right),” complete with beatboxing from trombonist Reggie Pace.

Bon Iver ended back at the beginning, with For Emma, Forever Ago highlight “Skinny Love” being treated as an acoustic stomp and holler with a chain gang backing chorus. Encore closer “The Wolves (Act I and II)” could’ve passed for a backwoods Gospel spiritual, its closing refrain – “What might’ve been lost” – gaining sway with each passing recurrence.

It proved a final, convincing, call back to the wild. 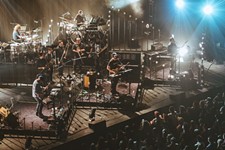 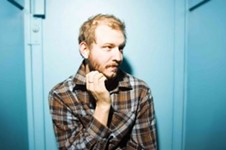 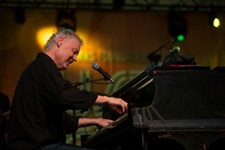