Live review of Rush at the Frank Erwin Center 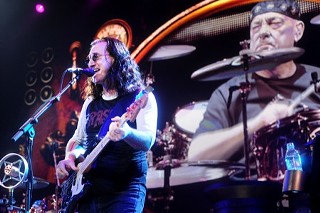 Delivering the same set-list at the AT&T Center in San Antonio last September, the Canadian power trio couldn’t match the expert cross section of songs performed at the Erwin Center in 2008, but past the wobbly, curiously-curated first set, the three-headed classic rock monster matched its own arena pyrotechnics.

“Presto” came as a pleasant surprise, and a triptych of “Freewill,” “Marathon,” and “Subdivisions” closing out the first set went from lope to sprint to victory lap with the surety and thrill of an Olympic champion. Even then, next LP preview “BU2B” proved the heaviest hitter of the evening, its Vapor Trails/Snakes & Arrows runoff due every geyser of steam blasting from the stage.

Acid rock’s got nothing on Rush. Roll the Bones
Rush joins the ranks of Hollywood elite