The LeRoi Brothers at 30 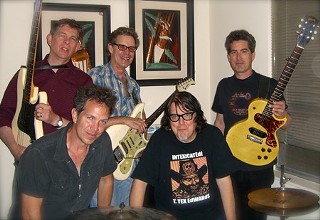 Few bands last 30 years. Some – think the Stones or U2 – stick around because there’s megamoney involved. Others, like Asleep at the Wheel, do it for the love of the music, not to suggest there’s no cash attached. Friday at the Continental Club, another Austin band enters the 30-year club: the LeRoi Brothers.

Originally a quartet comprised of drummer Mike Buck (founding member of the Fabulous Thunderbirds), guitarist Don Leady (later of the Tail Gators), guitarist Steve Doerr, and bassist Alex Napier (now deceased), the LeRois have gone through many configurations. Some included notables such as Keith Ferguson, Alex Napier, Evan Johns, and Sarah Brown, but always with Buck and Doerr at their core. For years after the group appeared, they were one of the area’s most beloved outfits, winning a handful of Austin Music Awards for Best Rockabilly and/or Roots-Rock from 1982 through 1996.

Bass player Pat Collins, who joined in 1991, explains the band’s longevity: “It’s not anyone’s number one concern, I think that’s how it’s lasted so long. It’s more like a club now. We get together and play a couple of times a month. That’s a good month, I guess. Everyone has side projects. It’s kind of worked out that almost every year we’ve done some sort of festival, a one-off thing, or a week-long trip. We went to Finland last year. There are fans there who’ve been into the band longer than I’ve been in the band. You’ve got to have them!”

Last year the group was dealt a blow when longtime guitarist Casper Rawls left to pursue other interests.

“Sadly we don’t get to play Casper’s songs anymore, because he’s not around to play them,” Collins relates. “It was April of last year – that was his last show. We got to do some James Burton gigs with him, which were great, but I think Casper had done 25 years or so with the band and it was time to move on. It’s changed the dynamic a little bit. In the last couple of years, Joe Doerr is back in the band. He was in the band in the 1980s. He’s been back with the band now longer than he was originally. So it’s the same, but in a way it’s different.”

2000’s Kings of the Catnap was the last LeRoi Brothers album, so I wondered if there’s anything new in works.

“I saw the Smithereens were putting out their first record of original material in 11 years," Collins says. "I was thinking, ‘Hey, the LeRois can do the same thing.’ It’s possible. I know that Steve and Joe have been working on some new things. I’m hoping that there will be a few surprises this Friday. But for the most part we’re going to be looking backward instead of looking forward for this anniversary thing. Steve keeps talking about getting back in the studio. I keep my fingers crossed.” 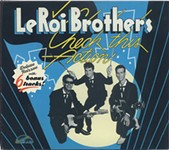