Now I Got Worry

The return of the Jon Spencer Blues Explosion 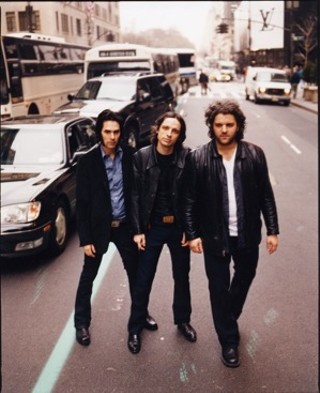 For years there hung in Sam’s BBQ a signed black & white photo of the Jon Spencer Blues Explosion. The image seemed a fitting synopsis of the band’s legacy: Maximum R&B and bombastic punk confrontation with serious juke joint credibility.

Spurred in part by an extensive reissue campaign that now includes 2-CD editions of 1994’s Orange and 1998’s Acme, both of which boast tons of ridiculous remixes, studio tomfoolery, and bonus cuts, the original power trio – Spencer, second guitarist, and drummer Judah Bauer – is back on the indie circuit. The Blues Explosion detonates at Mohawk on Friday.

Off the Record: What came first, the reunion idea or the reissue campaign?
Jon Spencer: I don’t know if we can really call it a reunion. There was no official end to it; we just became very un-busy. We’ve played a few shows over the past few years and in 2007, after the In the Red Jukebox Explosion compilation. With the back catalog being reissued last year through Shout Factory, we have become a lot busier. Part of that was a desire to do it again. We didn’t just want the reissues to hit the ground. We wanted to mark the occasion in some point. And since we’ve started playing again, it’s gone well. I’ve certainly enjoyed it very much.

OTR: Kevin Shields referred to the My Bloody Valentine reunion as a way of correcting and moving forward through the past. Can you relate to that?
JS: No, not really. There isn't anything that needs to be fixed. To play again with this band still seems very fresh and very alive. That bond still exists between the three of us. I don’t feel like I’m trying to rewrite anything.

OTR: That punk-blues hybrid really blew up in the mainstream over the past decade or so. As someone that really pioneered that sound, what’s it been like to watch happen?
JS: It's a little bittersweet. It'd be nice to be making a lot of money but the Blues Explosion always did out own thing. We were true to ourselves. We were uncompromising. We made our path and didn’t answer to anybody. I think we maybe blazed a little bit of the trail and have influenced some other groups, but a lot of that stuff isn’t my bag. It just seems to be a rock & roll retread of what was on the radio when I was a kid in the Seventies. With the Blues Explosion, we’re very much a punk band, not in the sense of the Sex Pistols or Ramones – those are great bands that I take influence from – but in the sense that we do our own thing. It’s very forward thinking and modern. I don’t think we’ve ever been rehashing 1970s rock.

OTR: In reviewing the first batch of reissues, I wrote that the Blues Explosion had more in common with Butthole Surfers than the Black Keys.
JS: The Buttholes were definitely a great band. There were so many fantastic bands in the underground hardcore and post-hardcore scene. For us bands like Swans, Black Flag, and even earlier groups like Suicide were just fantastic. We definitely took a lot of inspiration those underground freaks. We also took a ton of influence from soul music and rhythm & blues and even No Wave. There was so much crazy stuff that we were drawing from. But I have to stress we weren’t doing this FM radio rock thing. When that stuff became popular, I didn’t feel like they were kin to us at all except in the most surface-level, superficial way.

OTR: None of those bands have that sense of confrontation, which seems to be one of the common threads in the acts you listed.
JS: We tried to straddle a line between getting in people’s faces and messing with their heads. We do take some delight in tickling or shocking people, but at the same time we’ve always been deeply committed to presenting a real show. Our greatest touchstone is probably James Brown. When we started a lot of the other indie bands didn't even seem like they even wanted to be on the stage. We were definitely up there to do something.

OTR: Even still, there was so much controversy surrounding the Blues Explosion. How absurd does that seem in retrospect?
JS: We certainly were misunderstood at times. That still seems to happen these days since some of those people are still out there. Of course to be labeled as a racist or a minstrel act, that makes me hurt and angry. This is music that we love. We’re not doing this as a joke or with irony intended. We’re extremely committed to this. We’re trying to keep this music alive and pay tribute to it, to carry the torch and do something new with it.

OTR: That was especially true of your collaborations with R.L. Burnside. How exactly did A Ass Pocket of Whiskey come to be?
JS: We were fans of R.L. Burnside. I thought it would be great to have R.L. play some shows with us. We proposed the idea to Fat Possum and worked it out. We just began touring together and through that we got to be fast friends. We were spending an awful lot of time hanging out, backstage or at a hotel room, playing music or telling jokes. Soon enough we also began to spend R.L. and his band on stage. So the Ass Pocket of Whiskey record grew from that. We laid down what we were doing on stage. It was a combination of jamming on these R.L. songs and letting him tell those jokes, the kind of tall tales he would share with us. That’s totally who he was. It wasn’t like we were trying to set him up as some character. It was not a chemistry experiment or a cold, calculated affair.

OTR: How did that experience really influence the Blues Explosion after that?
JS: That was really a highlight of the band’s time, a truly magical time. We learned a lot from R.L., probably the most concrete example is on the next record, Now I Got Worry. Judah in particular picked up some tricks and technique on guitar from him. There’s a lot more larger life lessons, which are harder to point at.

OTR: Have you started writing new music together?
JS: We have been. These reissues started last year, and we’ve played for about a year. It’s not like we’ve done a world tour. We’ve played a few shows here and there. We’ve written some songs, and so long as we continue playing, if we get enough of them, I’m sure we’ll get into the studio.