Scenes from the Railroad Revival Tour 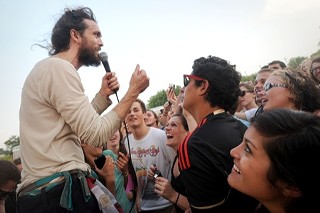 Mumford & Sons fittingly ended Tuesday’s performance at Waller and Fourth Street with a celebratory rendition of Woody Guthrie’s “This Train Is Bound for Glory.” The Railroad Revival Tour’s the first of its kind – a six-stop trek by vintage rail cars (“Santa Fe” and “California Zephyr”) that aroused the spirit of the Wild West and history of American music.

For Britain’s answer to the Avett Brothers, the evening capped a whirlwind week: a benefit for Invisible Children at Austin Music Hall, a taping of Austin City Limits, and an appearance at Austin High School, the latter leading to heroic marching band set finale “The Cave.” For just over an hour, Mumford & Sons delivered romantic waltzes and old-time folk-pop from its best-selling debut, Sign No More, most notably the excellent “Little Lion Man,” with a poignant desperation ready-made for network television dramas. The quartet seemed too tame and proper at times, but the collaborative spirit and unique setting still made for a remarkable evening.

Simply put, this was the most ingenious tour idea since Peter & the Wolf’s East Coast sailing trip, right down to the holographic tickets that looked like something from The Polar Express 3D. If felt like a miniature Austin City Limits Music Festival, exceptionally professional and filled to the 5,000 capacity limit with affluent soccer moms and fraternity brothers.

Alex Ebert of Edward Sharpe & the Magnetic Zeros even appeared to be wearing the same clothes from the band’s breakthrough at Zilker Park last year, though his collective’s frivolous C&W and light psych-pop lacked its former hypnotic spark. The exceptions were the boots-strapped anthem “Home” and any other number featuring the honeyed twang of cohort Jade Castrinos.

For real-time revivalists, the highlight was actually the opening act, Old Crow Medicine Show, a legit string band that turned out a hootenanny with Dust Bowl authenticity in traditionals like “CC Rider.” The strum and drang of “Take ‘Em Away” matched the cocaine blues of “Tell It to Me” while the Pat Garrett and Billy the Kid revision of “Wagon Wheel” was evidence enough that this mountain quintet deserved its own moment with Bob Dylan at the Grammys.

I couldn’t help but think the Weary Boys threw in the towel too early.