James Taylor and company at the Bass Concert Hall April 23 He can’t quite hit those pie-in-the-sky highs anymore, the 63-year-old American folk hero singing in a lower register while his count-‘em four back-up singers collectively pulled some ozone notes, but really, there wasn’t anything the least bit wrong with James Taylor’s voice Saturday night at a bustling Bass Concert Hall.

Seven instrumentalists backed Taylor as well – guitar, bass, drums, congas, keyboards, and two horns – but in kicking off the two-hour performance with Buddy Holly’s “Everyday,” the soul of 1970s songwriting grace fueled at least one fantasy about what he could accomplish with only an acoustic guitar.

“Beautiful place, this Bass theater,” opened Taylor after back announcing Lubbock’s shooting star. “This [next] song got me a record deal with Apple Records in 1968. It’s about a girl I used to know.”

“I Feel Fine,” delivered in Taylor’s still boyish voice, wasn’t even its own punchline surprisingly.

Listen for it on Abbey Road, in fact. So went the first set, Taylor’s avian features paralleling the piercing honesty of some of his greatest hits: “Your Smiling Face,” “Carolina in My Mind,” “Country Road.” The kindly presence of Taylor’s signature vocal purity got lush backing at all points, but if another golden-voiced singer-songwriter can go it alone at the Bass (Neil Young last June), Taylor should be as fearless as his confessional songcraft. Then again, the standing ovation at intermission would’ve been a riot had Taylor been stripped to just him and his six-string.

The second set got closer to such an ideal past an ill conceived tribute to Junior Walker & the All Stars (“Roadrunner”) and the “mambo version” of Sweet Baby James cornerstone “Steamroller,” here complete with Taylor’s mugging. Backed by only a fivepiece, “Down on Copperline” rippled with unrivaled intimacy, while “cowboy lullaby” “Sweet Baby James,” a plaintive “Fire and Rain” (down to four backers), and even clap-a-long “Mexico” still radiated the Zen calm of Taylor’s initial big bang.

Shawn Colvin in a surprise guest spot for the second encore, “Close Your Eyes,” finely modulated her harmonies as she watched Taylor sing on the stool next to her. You could hear the lump in her throat. 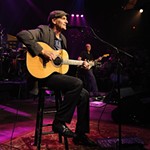