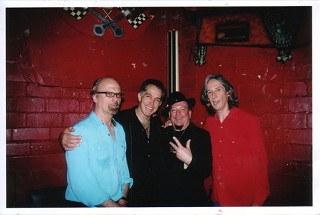 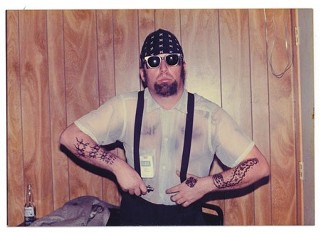 Shortly after the passing of bassist Alex Napier on Feb. 3, his longtime bandmate and former Bob Dylan guitarist Denny Freeman penned this personal tribute. It's a moving account of their enduring friendship and Austin blues history. On the occasion of the Continental Club's memorial for Napier on Sunday (2-5pm), it's been copied below, in its entirety.

“I met Alex in 1971, maybe 1972, whenever it was that he and Kathie Crabtree opened up the night club, Rolling Hills, in West Austin. Was a nice place, but very basic, rustic. Old wood building, with a tin roof, concrete floor at the end of a ridiculously bumpy dirt/ gravel road, actually on the outskirts of town, at the time... You turned on the dirt road, if you could see it, from Bee Cave Road. It looked more like an old party barn, than a night club. But that never matters, of course. Some of the best music has always been heard in very humble places. The place did actually have a stage, and Alex and Kathie's musical tastes were in tune with the time and place.

“I don't remember all the bands that played there, in Rolling Hills' brief life. There were rock bands and blues bands, except in those days there were only about two blues bands at the most. This might be where I heard Stevie play guitar for the first time. Stevie was younger than us, still a teenager, and it took him a little longer to get to Austin. I know it was in this room, with the band Blackbird, where I heard him, but now I can't remember if it was when the place was Rolling Hills, or it's next and last incarnation, the Soap Creek Saloon (probably Rolling Hills)....

“Both places were among the most important venues in my life, as well as others'. Initially, it was important to me because that's where I met Alex, after seeing him sit in with Jimmie Vaughan's band, Storm. That was important because I was wanting to put together a band, myself, preferably with Paul Ray, and to play blues, or at least blues-based stuff, and I thought, well, here's a bass player...

"In those days (1971-'72), it was very difficult to find enough folks to form a four-piece blues band, because hardly anyone wanted to play it, or hear it. Paul and I had been trying for a while, back in Dallas, but our timing was off.

“But, before all this, a bassist, Jamie Bassett, and I, moved to Austin from Dallas in May 1970. Jamie had previously played with Paul and Jimmie, in Dallas, and California, but that band exploded in Los Angeles, in 1969, I think. Many Texas bands went to seek their fortune in California, only to explode soon after arriving.

“A month after Jamie and I moved to Austin, Jimmie and Doyle Bramhall moved down, and a week later, the four of us had a band. Storm. Paul followed a month later, but we already had a band, with Doyle singing. So bad timing again, with Paul and me. After about six-seven months, Jimmie replaced me with Lewis Cowdrey on harmonica, and not long after, Paul Ray joined up with Storm, playing bass. So, that eliminated Paul from my plans, again, for a while.

“But, when I saw Alex sitting in, a year or two later, at Rolling Hills, playing a shuffle with Jimmie, I thought well, there's my bass player. Now we were two. Another Dallas boy, Andy Miller, another Oak Cliff fella, moved down, and after I saw him sitting in on drums I thought , well now we're three. And we were, we just needed a vocalist. About this time, Cecil Cotton, another Dallas guy, came to Austin from San Francisco. He was a great singer, and was interested, so now we had a band, and we named it Hard Times.

“We rehearsed and were pretty excited, but after two gigs, Cecil ran off to Dallas with a Dallas girl that had also moved to Austin, so now we were three, again. We had met and gotten to know W.C. Clark, a local black blues figure, who was kinda our mentor at the time. We had different gigs, jam sessions around the East side, where W.C. knew everybody. The black Austin music/ blues scene had pretty much dissipated by then, so he was happy enough to hook up with all these middle class white kids, who had moved to Austin to play some blues. Angela Strehli, a Lubbock girl, had moved back from California, to Austin, where she had previously lived, and joined our little blues cult on vocals and harmonica. Keith Ferguson, from Houston, also by way of San Francisco, came about this time, adding to the fun. Derek O'Brien, also from Dallas, was also on the scene.

“After Cecil departed, Alex, Andy, and I got either W. C. or Angela, can't remember who was first, to sing with us, and eventually they both were permanent members. We still called ourselves Hard Times, but changed it to Southern Feelin'. I don't remember why, unless a more well known band was using the name. We played blues, soul music, some more elementary soul jazz, with W.C. singing and playing guitar, and Angela singing, playing harp. This was c. 1971-'73.

“After about a year and a half, Paul Ray was no longer playing bass with Jimmie, so Alex and I left Southern Feelin', to hook up with Paul to form Paul Ray and the Cobras. We used different drummers for about a year, until we got Rodney Craig, who became and remained the permanent drummer. After about a year, which would put us into the beginning of 1975, Stevie wanted to join up with us, so we welcomed him, and he remained until sometime in 1977, I think, when it became time for him to go become Stevie Ray Vaughan. Alex left at the same time, and went on to play with many folks, including Hook Herrera, Charlie and Will Sexton, the Leroi Brothers, Lou Ann Barton...many more....

“Alex and I were roommates, bandmates, and just mates. We had a lot of laughs, over the years. Started two bands... shared a lot of joys and pains...stayed in touch, and were playing Paul Ray & the Cobra reunions once a year at Christmas time at the Continental Club, until last December, when he just didn't have the strength, anymore.

“We were friends until the end. We love you.