Out Here in the Middle

A quick one with James McMurtry 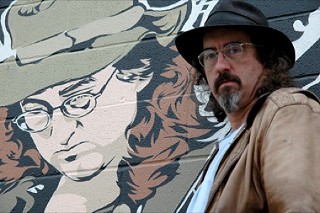 James McMurtry's 2004 LP, Live in Aught-Three, and 2005’s Childish Things are being reissued, the former on vinyl for the first time. With that and the fact that he’s started a Tuesday/Wednesday night residency at the Continental Club, I decided to get the man that author Stephen King calls “the best songwriter in America” on the phone.

Geezerville: Why are those two records are being reissued now?

James McMurtry: They were leased to Compadre and the lease ran out so I decided to put them out on Lighting Rod, where I put out my other stuff, which has RED distribution, which I like. The live record is just the right length for double vinyl, too.

G: You’re also doing a lot more solo shows than you have in the past. What’s your thinking on those?

JM: Nowadays, to survive you’ve got to bundle every possible niche together. The solo acoustic thing is a completely different market from the band thing. There’s some crossover, but around the country there’s a lot of different venues for that and a different crowd.

G: It’s been a while since you’ve had any new music out. Any chance there will be a new record this year?

JM: I’ve got one new song recorded so far. Usually I book some studio time and just hope I’ve got the songs written. That got to be expensive after awhile, so I’m doing it in a more proper way of actually getting the songs written before I go in the studio this time. It’s just taking a while without that pressure. It’s possible there will be something this year, if I get a burst. I don’t know.

G: So you’re having difficulty writing new songs these days?

JM: Yeah, they’re not coming as fast as they used to.