A partnership between Texas and Danish songwriters yields great music Before Spot Festival in Denmark last May, a group of Texas and Nordic songwriters convened in a castle designed by alchemists, and they made real magic. Danish singer-songwriter Vibeke Falden hopes to tap into that again, this time at the Cactus Cafe tonight.

For three days in merry May, Falden composed with Austin’s Troy Campbell, Scrappy Jud Newcomb, Danny Malone, Matt the Electrician, and Nathan Felix, plus fellow Danish artists Anna Bell and Ida Wenoe Bach, Lara Runarsdottir and Johan Kristinsson from Iceland, Norway's Therese Aune, and Brandur Enni from the Faroe Islands. The group played it out before Spot’s rapt audience then, and when Falden arrived last week in Austin for her House of Songs stint, there was a joyous homecoming of sorts.

There’s not a lot in Falden’s solo music that suggests much in common with the kind of roots music and traditional singer-songwriter modes as we know them in Austin – she’s much more electronic Euro-pop, as her performance of “Dykker Ned” on YouTube shows. But sitting around the warm communal table in the House of Songs – literally, a house in South Austin – with Campbell and Felix on a cool, sunny Thursday, it’s clear the bond forged in co-writing was as strong and intense as it appeared in May, fresh from the fire.

“I experienced the cultural differences in songwriting,” Falden’s hair shone bright red in the morning light as she spoke animatedly in faintly accented English, “but it didn’t really change my way of working. When you go into a co-writing session writing with people you’ve never met before, it’s not really you or writing your ideas, it’s about having a song done. But the experience was inspired! It gave me energy and a lot of confidence.”

“I usually write lyrics very specific to a situation I’m in, but I remember writing with Troy when we did ‘Constellations,’ and it was about the sky! And the stars coming together! And I was like, what?? I would never write, ‘go ahead, feed me to the lions, go ahead throw me to the wind…’ I got to write with Johann and Scrappy, and Scrappy says, ‘I think we should write a song about the longest day of the year. Can you feel it coming down?’ I was like, ‘What is coming down?’"

"Instinctively, I understand it now, but when we wrote it, I didn’t have a clue. Then again, it’s not about your personal reference, it’s about having the song done.”

Falden joins fellow Danes Malene Mortensen and Poul Krebs as guests of House of Songs with Matt the Electrician, Danny Malone, and the Noise revival Orchestra at the Cactus Cafe. House of Songs is a Danish government-sponsored partnership between its songwriting guilds and Austin-based songwriters. 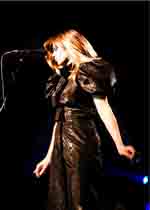