ACL staff members reflect on their first memories of Studio 6A 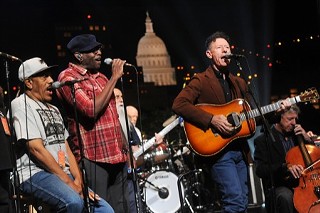 Like most patrons of the beloved PBS program, Lyle Lovett first visited Austin City Limits as a fan before making his proper debut with Nanci Griffith in 1984. With that in mind, and in honor of the final taping on the UT campus this past Monday, OTR asked past and present staff to recall their first experiences in Studio 6A.

Scott Newton, Photographer
“The first ACL show I attended was never aired; it was the infamous Kinky Friedman taping from season one in 1975. The taping was considered too raunchy for public airing. I attended the show as an audience member, but I brought my camera and shot a couple of rolls of black-and-white film of the show from my seat. It was a good thing I did because otherwise there would be no images from that particular show at all – the photographer from that year took the negatives with him, and we've never seen those images since. Later, in 1979, I was hired to be the show's photographer, a position I've held ever since.”

Jeff Peterson, Producer
“I was hired by KLRU as an audio engineer on Sonrisas, a dramatic series for kids on PBS, and was asked to work audio on the Tom Waits taping in December of '78. Needless to say, I started plotting to get more involved with ACL. That worked out pretty well.”

Leslie Nichols, Associate Producer
“In 1996, I moved to Austin to begin a new life and a job at KLRU as Production Secretary/Receptionist. Soon after I started, I attended my first ACL taping: The songwriters special with Willie Nelson, Waylon Jennings, Kris Kristofferson, Billy Joe Shaver, and Kimmie Rhodes. Just another day at the office.”

Emily Joyce, Associate Producer/Digital & Interactive Director
“In the fall of 1996, I was on my way to an evening class in UT’s School of Communication when I saw a bunch of people standing on the patio. Turned out it was an ACL taping with Lyle Lovett; somehow I ended up getting inside (and skipping my class). I landed an internship with ACL the following year.”

Maury Sullivan, Senior Vice President of Community Engagement
“The first ACL taping I worked was Phish. What an experience that was. Capacity was larger then and people were dancing so much even the jib bounced.”

April Burcham, Director of Communications
“In 2000, I started at KLRU and walked into the studio for the first time for a double taping with Kelly Willis and John Hiatt. I was struck by the magic of the studio after growing up watching the show on TV with my dad. I see people every week have that same ‘This is it!!’ moment when I give tours of the studio.”

Dick Peterson, retired Executive Producer
“I started to work in 1984 as the Director of the Production Department for KLRU. I was lucky to be the Production Manager for Austin City Limits as part of the job. There were some pretty great artists performing on the ninth and tenth season. Two of the artists that stand out in my early memories were Jerry Lee Lewis and Stevie Ray Vaughan with Double Trouble. Their amazing talent and through-the-roof energy made Studio 6A electric like so many hundreds of other times that were to follow over the years.”

Michael Toland, Assistant Producer/Archivist
“The first taping I attended was Dr. John in 1991, years before it ever occurred to me I might work directly for Austin City Limits. At the end of the show, the good Doctor induced the audience to get up and dance, and, like everyone else, I shook my lily-white groove thang like a fool. Years later, when my soon-to-be wife was explaining how she would record episodes of ACL to prep herself for her move to Austin from San Diego, she played me her favorite episode: Dr. John. It was then I realized I could be seen on camera, demonstrating the stiffest dance moves in ACL history to music that should be able to make a corpse boogie. ‘Umm,’ I reluctantly pointed out, ‘did you know I'm on camera right there?’ She laughed loud and long – really long. So my wife had actually seen her future husband years before we met. Despite my so-called ‘moves,’ she married me anyway.”

David A. Kuipers, Vice President of Engineering
”My first taping, in November of 1982, was Delbert McClinton, who put on a great show, and I just missed BB King by a few days.”

Sharon Cullen, Audio Supervisor
“January 16, 1990. Garth Brooks, before he was GARTH BROOKS. He was a newbie; I was a newbie. He made me feel like I was exactly where I was supposed to be.”

Paul Sweeney, Video Editor
“I started at KLRU as a VT operator in August of 1981. During my first week at work, I got two tickets to an ACL taping featuring the country singer John Anderson. I was not a big fan of his, but I wanted to see what the tapings were like so I attended. To my surprise and delight, Anderson was featuring the great Buddy Emmons on steel guitar that night. This is the one and only time I've ever seen Emmons play, and it was a great experience.”