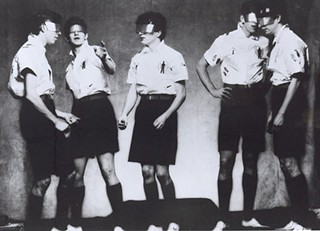 No Devo, no Revenge of the Nerds series in the 80s!

I chased down Devo’s bassist Gerald Casale for an interview, cold-calling him from an old number left over from our South by Southwest 2009 interview. He actually responded, and gave me a positive reply, but three days after we talked, Devo’s appearance at Fun Fun Fun Fest was canceled. Shit.

Not only have I interviewed and watched Devo since their first tour, but that day Casale delivered the kind of interview I secretly hope for and rarely get. He wasn’t generating requisite rah-rah enthusiasm for the tour his 35-year-old band was making. He wasn’t shilling his new release, Something For Everybody, for the sake of ink. His answers were short and pointed and coated in dry venom usually reserved for lifers in the music business. And they were too good to let go.

Casale was not being difficult; he was being blunt and honest, and it was refreshing to hear him speak without kowtowing to a label anxious for him to sell product. As students at Ohio’s Kent State University in 1974, Casale and singer Mark Mothersbaugh developed the notion of musical de-evolution through avant garde video and films.

After Saturday Night Live introduced them to the world in 1978 in the way only TV could, they became MTV darlings, then pariahs. But if MTV bit the hands that fed it, Devo didn’t die of rabies, they grew stronger. The masters of non-conformity dressed uniformly produced dazzling product on film and stage that melded music and technology like no one before with records such as Q: Are We Not Men? A: We Are Devo!, Freedom of Choice, and New Traditionalists.

Austin Chronicle: What’s going on with the band? You’re touring hot festivals. You are actually working. Is Devo undergoing a second evolution or third wind?

Gerald Casale: Certainly trying to make it so, yeah. You heard the new record, I take it.

AC: Yes, and I liked it because it sounded like the Devo I know and love. So, do records matter these days?

GC: Apparently not. You can put out a record and nobody cares. Doesn’t matter how good the songs are or if you have all the energy and all the aesthetics together. Doesn’t matter.

AC: What does matter?

GC: I’m not sure what matters. Marketing hype.

AC: Well, you guys are masters of that. You’re the template for DIY.

GC: Yeah, but in these days, you can’t do it yourself. Maybe if you are a band of 20-year-olds you can do that.

GC: Nobody’s going to let us do that. The establishment has to tell people why they should listen to Devo.

AC: Did sequencing matter on that last record?

GC: It matters to us, but that’s probably where it stops. We still sit down and listen to something beginning to end, and we like that. And we thought maybe there was a certain amount of people out there who still like that, so the CD was for them.

AC: How do younger Devo fans get your music?

GC: Forty-five percent of our sales were downloads.

AC: Was this record a relative success?

GC: It’s hard to say what success is these days. If we do a new video and a cluster of new shows in the spring, I’ll tell you then. The jury’s out.

GC: [Silence] Records aren’t like they used to be. A couple months ago, Eminem and Katy Perry were phenomenal sales on Billboard because they sold 200,000 records in a couple weeks’ time. Ten years ago, this would have been failure. So, maybe one-tenth of the people buy music. Most of them get it free.

AC: Are you sad about that?

GC: Of course. It brings down a whole relationship between artist and audience to where it becomes an untenable business model to support creative people. We rely on tour revenue and licensing to do that. We’ve created a very interesting phenomena brand name. If people use you in things they will pay you for, that’s success. If people come and see you and your concerts are sold out, that’s success.

GC: I love playing. I can’t say it’s hard. What makes it hard are the dealmakers: The promoters and the agents and the record companies. They start parsing the minutiae and beating each other up for every penny. That wears you down.

AC: Well, it’s easy to say the old record industry is dead, bring on the new barbarians at the gate.

GC: Whatever the new is. I don’t think there’s anything new to replace it, frankly. Only the implosion of what worked. Now you have chaos.

AC: But you and I know from our days in early punk that there is good in chaos – can that be redirected?

GC: Sure, but that was when people still bought music.

AC: Is that the difference?

GC: Yeah! If you remember, there was a healthy network of record stores as well as independent film houses and newspapers, and you built your fan base with people who were loyal to you and buying your music. That infrastructure is gone, replaced by the promise of the Internet, having a larger audience than ever just because you have a Facebook or Myspace page. And it’s largely an illusion. Lots of bands have 10,000 or 20,000 friends – and great songs, by the way! – but slugging it out in tiny clubs in their hometown area. The 20,000 friends aren’t buying many records, they’re saying they are your friend and listening to songs on your space. Then the poor band isn’t going anywhere and after four years of beating their heads against a wall breaks up and creates songs that should have been huge hits. I wouldn’t have put out a new Devo record if I didn’t think Devo had a valuable aesthetic and I had something to say. I wouldn’t have done that. I like this new record better than anything since Freedom of Choice. It sounded really good. We can’t help but be us. We don’t do what we do arbitrarily. That’s why we say, "What we do is what we do." 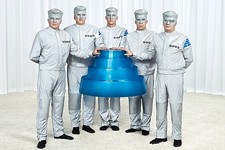