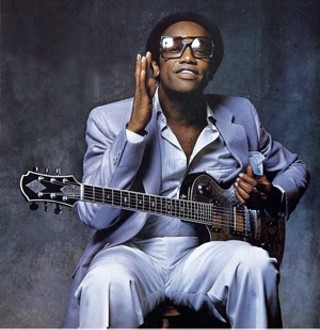 “I just did something with Rolling Stone on Solomon Burke,” opens Bobby Womack, without prompting. “That went well under the circumstances. You have think about things that take you up, not bring you down, but losing anyone is depressing. I never get used to it.”

At 66, Womack's seen it all. He's the oft-forgotten survivor of soul music, the only link between Jimi Hendrix, James Brown, and Damon Albarn's animated supergroup the Gorillaz, who bring Plastic Beach to the Frank Erwin Center on Friday.

Off the Record: So how did you get involved with the Gorillaz?
Bobby Womack: The Gorillaz called my manger in Europe and asked if I would record with them on this album, Plastic Beach. I had never heard of the group. I had been in another space. I didn’t have the urge that I knew I had to have to compete. I was trying to find that, and it just wasn’t coming to me. I felt like I had fallen.

They said, “Man, we love your music, we love everything that you do. Thank you for your time. We think you were way ahead of your time.” They had everything I had ever cut. I said, “Well, that’s 30 years ago. That makes a big difference.” I was joking with them, but I said, “I wouldn’t want to disappoint you. What if I came in a wheelchair?” They started laughing and said just to come. So they sent me the songs that they wanted me to do. When I got into the studio, it just took off. The thing that I noticed right away was that it was a very spiritual and clean environment, with no smoking, no drinking, no drugs around. I walked away from that years ago. I’ve seen too many people go, friends of mine.

I was really impressed with Damon. He's just a ball of fire. He goes from one country to another just to record a couple of lines of a group singing. He has this vision. I just don’t know. Everything started to open up to me again. I started to be hungry for what I love with a passion. I feel like I’m part of the family, for real. Sometimes you can do it for so long to where it's like turning a trick. You know where it’s going to take you and where it’s going to drop you off, but these guys, I watched them work and got more inspired.

So now I’m on the tour and Damon kept saying, “I would love to write and record with you on your next album.” He said, “I see you differently than when you were with Muscle Shoals. I see a different you. This audience that you’re playing to now is a young audience. We’re blessed. They’re hearing you for the first time.” He told me that between the days when we’re done touring, we’re going to do some writing and then go into the studio and cut, so there’s no way you can say no. It was uplifting for me. Everything that they’ve said and predicted, happened. Everything was clean, and he was straight up honest. If he didn’t like something you’re doing, he said, “Man, I think that you can beat that.” We don’t pull no punches. I know Damon hears things a lot different. And I’m comfortable with what I hear.

That was important for me, especially with these electronic artists. No one’s writing anymore. The older artists aren’t getting airplay anymore because it’s the old school. All of the airplay is rap. If you had an artist like Stevie Wonder they would put him in the old-school section. I didn’t like that. I thought maybe that’s the end of the road. After I started doing this tour, I said, “It's actually the beginning of the road.” But I never thought it was coming back. Forty percent of my life was the music, the other 60 I was getting high, and I was not happy. All of a sudden my manager comes in and asked if I would be interested in working with this band. I said, “I’ve heard of the Monkeys. I’ve never heard of no Gorilla.”

OTR: When you first heard the Gorillaz, what did you think of it? What did you make of it?
BW: I was just curious. They’re spaced; they’re out there, but I don't hear one song that reminds you of the one you just heard. It’s the same way with the bookings: me, Mos Def, Snoop Dogg, the old school, the new school, the school that’s going to come in the future. They’re like an old soul that’s been out there a long time. This guy’s got a dream. He sees it so clear that I hope it happens for him. When we played Beirut, he didn’t know what was going to happen. They had never played there. He started the album there, and he told those people that he was going to come back. So he put up all of the money, plane and everything, to get us out to those people over there. I said, “What do you expect?” He said, “Maybe 500 people. They don’t know who we are. If they come, they’re coming out of curiosity.” He had me on edge because he was on edge. We were sitting there waiting on the show to start, and they said they had 3,000 people in there and a 1,000 on the outside waiting to get in. I was so happy for him, because he really believes in it. He kept his word. Either he’s doing very well or he’s a trooper for God. Either way he backs up what he says he’s going to do.

I’ve seen it all. I’ve seen people play with machines more than they ever have. I like to see people sitting down and writing songs and going into the studios. I started back so far that you had to be on top of your game and have your own style if you going to hang with Sam Cooke, James Brown, and Jackie Wilson, guys like that. They were killers. I opened up for ‘em, and I’m glad I did, because I wasn’t in that war. I just opened the show with me and my brothers. It just got better and better. We grew a lot. It was like going into the Army and coming out a real soldier.

OTR: Getting back to the Gorillaz, did you write your parts for “Stylo" and “Cloud of Unknowing”?
BW: I like both of them. I like “Stylo” 'cause I like uptempo stuff. I think that happens maybe five or six songs into the show, and then we come back and I do “Cloud of Unknowing.” Damon wrote that song but wanted me to sing it. I said, “But you put so much time into it. Why don’t you sing it?” He said, “Nah, when I wrote this song, I was thinking about you doing it.” I understood. That's heavy. If I write a song, I don't write for other people; they just record it.

OTR: What I like about the Gorillaz is that it's almost like this band of outsiders – Damon, you, Mos Def, Mick Jones.
BW: Yeah. Everybody. Damon has a picture of every artist that he says every generation has to know. He's introducing me to a new world, and himself. You hear all of that different music, and all of its carrying its own weight. There's a place for all of it. There ain't no bad music.