The Old 97's continue being relevant

To celebrate the release of The Grand Theatre Volume One (New West), the Old 97’s spent most of this week swinging through Dallas, Austin, and Houston on a record store blitz, while also performing free fan-only shows.

Wednesday evening they arrived at the Ghost Room for a KGSR-sponsored event that felt like the old days, the crowd alternating between rapt and singing along at the top of their lungs while the quartet maneuvered the best they could on the Room’s tiny stage. There were new songs: The shadowy “You Were Born to Be in Battle,” the forlorn “Champaign, Illinois,” which defiantly cops its melody from Dylan’s “Desolation Row,” and “A State of Texas,” which proves someone can still write great song with the T-word in the title.

The 97’s leaned heavily on its past, however, reaching back to the first record for a frantic “Doreen” while also including long-time favorites like “Big Brown Eyes” and “Barrier Reef.” Rhett Miller seemingly hasn’t aged a day and refused to look silly with that head-banging thing he does. Guitarist Ken Bethea continues to be the band’s secret weapon, his snaky leads adding power and depth to their sound.

Of all the bands from the great alt.country scare of the 1990s, few would have predicted the foursome from Dallas would be among the last standing and continually vital. Save for a couple moments where they stretch a bit, on The Grand Theatre they sound like the same determined punk meets country band they’ve always been and it’s just a reminder why they continue to be revered.

Opening the show was recent a New West signing, Atlanta-based quintet Ponderosa, whose mix of rock and soul suggested a throwback to the 1970s. Mores Stones or Faces than the inevitable comparisons to the Black Crowes, the young group's stout songwriting and assured interplay helped a set that was short on between-song jabbering and long on gritty intensity. Their disc isn’t scheduled for release until January, but it’s likely to be worth the wait. 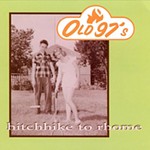