A week or so ago, Justin Townes Earle was arrested on assault and battery charges after an incident at a venue in Indianapolis. Soon after, it was announced the 28-year-old son of Steve Earle was canceling his tour and entering rehab.

While one can only hope he gets the help he seeks, it’s doubly sad since Earle was touring behind Harlem River Blues (Bloodshot), his strongest work to date. Further distancing himself from the path blazed by his dad, musically at least, it’s a tour de force of rockabilly, R&B, folk, and country with an arresting lyrical style. From the title track to the horn-fueled Memphis soul of “Slippin’ and Slidin’” to “Workin’ For the MTA,” a worker’s plea that channels Woody Guthrie, Earle succeeded in compiling one of the deepest roots music albums of the year.

Bobby Bare Jr. has been compared to his famous dad much less often than J.T. Earle and with good reason. Bare Jr.’s work has often been zany and loud, leaning on his Nashville roots but hardly country. Continuing the trend initiated by Ray Wylie Hubbard earlier this year, Bare’s latest is called A Storm, A Tree, My Mother’s Head (Thirty Tigers), and refers to a rainy night when his mother was injured by a tree that fell into their house.

With the help of three members of My Morning Jacket and co-producer David Vandervelde, the younger Bare achieves his goal of becoming the American Morrissey. Whether or not that's a good thing depends on where you stand with the former Smiths singer, but to these ears, Bare has lost some of his ability to scribble-stick your brain with melodies and his lyrics seem just a touch more obvious and weird for the sake of being weird than in the past. “The Sky is the Ground” matches MMJ riff-rockin’ with absurdity, and there’s a couple tunes he co-wrote with his father that are memorably dark, but in the end I suggest the next time you see a cheap copy of his ragged, noisy debut Boo-Tay, you pick it up.

I have to admit that when Jesse McReynolds’ Songs of the Grateful Dead (Woodstock) appeared in my mailbox, I was more than slightly puzzled. McReynolds, a bluegrass pioneer along with his brother, Jim, has been a member of the Grand Ole Opry since 1964. There’s no apparent connection, but the 81-year-old mandolin player takes to the songs of Jerry Garcia and Robert Hunter with obvious joy and easy-going vision, especially on “Bird Song” and “Fire On the Mountain.” A new Hunter/McReynolds tune, the amiable hymn “Day by Day,” with the guitar of David Nelson of the New Riders of the Purple Sage, sweetens the deal. Garcia was an aspiring bluegrass musician throughout his life, so there’s no real stretch here, but bluegrass fans and Deadheads will welcome it with a crooked grin. 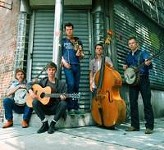