Seasons in the Abyss

Pixies, Rush, Megadeth, and Slayer: the return of the album. 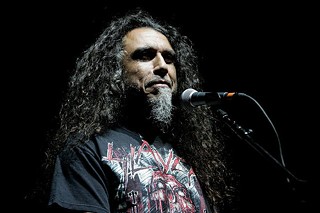 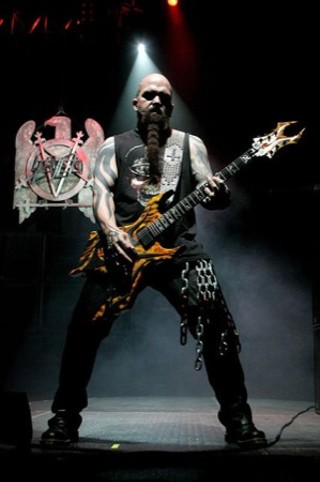 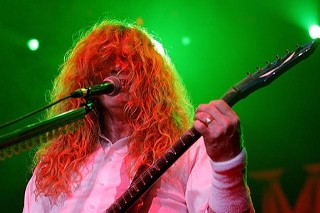 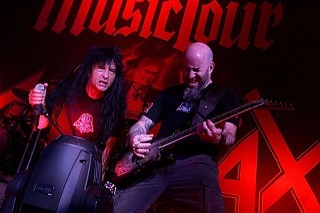 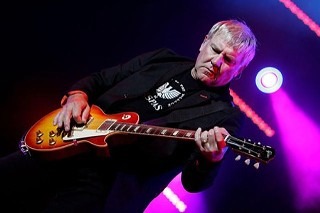 Like the novel, the album’s not dead. It simply hails from another century. And yet last week over a six-night span, four classic combos performed one of their name-making LPs in all its glory. Mostly.

Conventional wisdom holds that a group’s second set always plays out better, smoother, more self-assured. Me, I like rocky starts. You never know what’s going to happen. The Pixies’ two-night stand at the Austin Music Hall last Tuesday and Wednesday apparently followed the exact same script both evenings, or at least Kim Deal suggested as much when she asked the audience on Tuesday whether anyone was coming back the next day. “It’s the same set,” she lamented. With one notable exception: Tuesday’s closing cover of Neil Young’s “Winterlong.”

I’d fled by then, just as my early exit of a 1990s Los Lobos appearance at the Bass Concert Hall shorted me Young’s “Cinnamon Girl.” Nevertheless, the Austin Music Hall billowing white smoke for Doolittle b-side “Into the White” seemed an appropriate skedaddle song, especially coming after another spin-off from the show’s featured long-player, “Wave of Mutilation (UK Surf).” On the one hand, the former Boston quartet delivered in full, knifing through the 1989 indie landmark start to finish. Bookending it with the disc’s overflow proved off-putting at the beginning, but perfect at the end, and either way, knowing that you’re guaranteed certain hits at a concert, “Monkey Gone to Heaven,” “Debaser,” “Here Comes Your Man,” works. All sounded terrific. Anticipating “Gouge Away” last was its own reward.

Only the Pixies don’t like each other. Frontman Black Francis (real name Charles Thompson) barely looked at Kim Deal and interacted only with guitarist Joey Santiago, who never left his stage quadrant. The bassist and drummer David Lovering laughed and smiled at each other throughout the performance, but the college buddy guitar boys on the other side of the stage enjoyed their inside jokes all by themselves. At least during the Fleetwood Mac reunions of the last couple decades they were all neurotic enough to pretend they cared about their bandmates. The Pixies radiate all the camaraderie of four Stalinists.

Rush, by contrast, 42 years after forming, remains an alternative Three Stooges. The Toronto triumvirate no longer ascends the stage to the theme of Larry, Moe, and Curly, but except for legendary Canadian cranks Neil Young and Joni Mitchell, the North Country apparently breeds good cheer among men. Rush’s hilarious entrance and exit videos Thursday at San Antonio’s AT&T Center on their Time Machine tour poked merciless fun at the three band members with all the levity of SCTV (with whom they’ve worked) and the production values of James Cameron’s Titanic.

Launching with an ever crackling “The Spirit of Radio,” Rush’s first set hop-scotched through its last three decades with a lithe crunch: “Time Stand Still” (1987’s Hold Your Fire), “Presto” (1989),” and instrumental leg whip “Where’s My Thing” (1991’s Roll the Bones). New tune “BU2B” debuted a power chord straight out of the band's 1970s, while Power Windows’ “Marathon” sprinted into first-half closer “Subdivisions.” After another video interlude and intermission (“Due to the fact that we’re aging rapidly we’re gonna take a short break,” announced Geddy Lee), the once high priests of Nietzschian rock pulled out their 1981 high watermark, Moving Pictures.

Even the trio’s famously tight-lipped beat keeper and lyricist Neil Peart calls Moving Pictures their ultimate achievement in recent Rush documentary Beyond the Lighted Stage, one of the best and funniest band bios ever put to screen. Problem is, all but one of Moving Pictures’ seven tracks have either found their way into Rush’s set lists since the album’s release, or became live staples (“Tom Sawyer,” “Red Barchetta,” “YYZ,” “Limelight”). The one song Rush hasn’t performed since the disc’s heyday, “The Camera Eye,” never blinked, thankfully, 10 minutes of shifting texture and tempo as dizzying as its concert visuals of Manhattan. My own personal salivation, Moving Pictures closer “Vital Signs,” felt tossed off, but not gig sealer “Working Man,” which began as a ragga and ended like an anvil on Wile E. Coyote.

Anthrax, when it first reunited with peak years vocalist Joey Belladonna in 2005, performed Among the Living in its entirety, but Sunday at Houston’s Verizon Wireless Theater, the first wave thrashers were content to frame their 40-minute opening set with the 1987 platter, “Caught in a Mosh” the kick-off and “I am the Law” kicking it shut. Belladonna proved the clear-eyed and energetic frontman that Megadeth mastermind Dave Mustaine proved back in April at Stubb’s while reviving 1990 shred-fest Rust in Peace. That Mustaine was nowhere to be seen on Sunday, hiding inside his waterfall tresses (see Gary Miller's photo gallery above) and mumbling the album’s lyric cycle, though “Five Magics” lived up to its title. An hour into Megadeth’s set, the venue bellowed for Slayer.

Seasons in the Abyss, Slayer’s fifth splatter (1990), wasn’t a necessary selling point to this leg of the thrash titans’ current tour – not with last year’s World Painted Blood becoming the fourth in line after the group’s big three: Reign in Blood, South of Heaven, and Seasons in the Abyss. As proof, opening combo “World Painted Blood” and “Hate Worldwide” smacked a full house awake before Seasons’ battle cry “War Ensemble” cued up the LP. “Expendable Youth,” “Dead Skin Mask,” “Hallowed Point,” and “Skeletons of Society” all in a row pounded like the WWII bombing of Dresden, and, in the quartet’s stripped stage set-up, often bathed in blood-red light, reasserted Slayer’s metallic omnipotence. Like the Stooges and Ramones, Slayer does one thing, but they invented it and play that golden note like no one else, the 30-year-old foursome the Beatles of thrash metal to Metallica’s Rolling Stones. In the funereal “South of Heaven,” first of a handful of greatest hits in the wake of Seasons, dirges Slayer’s “Yesterday,” and in “Raining Blood,” its “A Hard Days Night.”

Slayer’s Seasons in the Abyss easily tops the list of last week’s live album replication, but please God (or Tom Araya) don’t tell me I have to wait 20 years to hear World Painted Blood in its entirety.