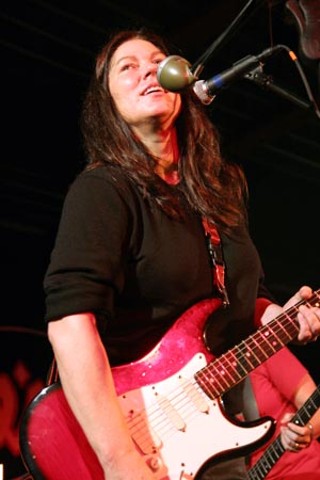 In case you didn't read this week's music story, Pixies play their 1989 LP Doolittle tonight and tomorrow at Austin Music Hall. It's the unofficial start of an early 1990s nostalgia marathon, followed by Pavement on Sept. 28 at Stubb's and Guided by Voices two days later at East Side Drive In.

However, for a whole generation of ladies who came of age in the early 1990s and didn't necessarily identify with shaggy-hair dude rock, Kim Deal was the ideal. The Breeders, the band she formed with twin sister Kelley after the Pixies split, agreed with my Midwest sensibilities, and their 1993 LP Last Splash is forever part of my musical education.

We covered a lot of territory in our 20 minutes. Here, we discuss the phenomenon of playing an album like Doolittle at a time when the art of listening to an album has kind of been lost.

Austin Chronicle: The Breeders are playing All Tomorrow's Parties, but you're not doing Last Splash, right?

Kim Deal: We've been asked, but it would be weird because if we were gonna do it we would use [bassist] Josephine and [drummer] Jim. Wouldn't that be weird if we didn't use them?

AC: Does the idea of playing an album in its entirety appeal to you?

KD: Oh, I like it a lot. I love the idea of the album. You know albums, that's what I know and there's something really OCD about playing something from the beginning to the end. And, you know, since I know the albums, a lot of times I'll know which song goes next, so it really does feel like ... like you know that Led Zeppelin song [starts humming]?

KD: [Starts singing the lyrics to "Living Loving Maid (She's Just a Woman)," which follows "Heartbreaker" on Led Zeppelin II]. But anyway, that's the second song, and they sound like the same song but they're not. I mean, but you listen to them together.

AC: Right, there used to be more of a narrative within an album. Listening to it as two sides.

KD: I don't know if there was a narrative, but they were on the record back-to-back and they were this close to each other and it started right away. And so the two songs lived together, and the minute one song finishes I always imagine the other song coming up. But yeah, that's just a hyper ideal of what album-listening should do. Recap: A Conversation with Kim Deal & Steve Albini
Indie rock revelations are all in the deets