Billy Corgan on the Smashing Pumpkins, the Source Family, and Sky Saxon “We’re a nation that doesn’t know how to mix foods,” Sky Saxon told me in June of last year, in what was more an improvised sermon than an interview. “Any kind of melon is supposed to be eaten separate, but getting back to Billy Corgan, who I didn’t start on, I really love him. He’s my friend, and I think my family enlightened him to the name God Yahowha."

At the time I didn’t think much of the connection. It was one minor footnote to a long, strange summer afternoon filled with 2012 prophecies and spiritual philosophy. In preparing for the Smashing Pumpkins' sold-out visit to Stubb’s on Monday, however, Corgan confirmed the profound effect that the Seeds frontman had on his personal and professional life, inspiring his ongoing 11-EP saga, Teargarden by Kaleidyscope.

Off the Record: I had the rather unfortunate honor of being the last person to interview Sky Saxon.
Billy Corgan: Oh God [laughs]. That’s ominous.

OTR: It sounds like you had some history together.
BC: I knew Sky for about two years before he passed away, but I had grown up a Seeds fan so I was aware of him musically long before I met him. He came into my life in a very strange way, and we ended up collaborating on some music. The idea was for it to be an album of his, but then it got weird in typical hippie style - people wanted to release things before they were finished. You know from talking to him, he was very beautifully scattered. That music is still there, and hopefully it will be released some day.

OTR: How did you first cross paths?
BC: He was in what was called the Source Family, and there was this book that came out about them. I convinced one of my friends to buy it, even though I was afraid to buy it myself, seriously. By that night my friend had found Sky on MySpace, and he said they were coming here to record. Within, like, two days, Sky; his wife, Sabrina; and Jim [Edmonds] from Yahowha 13 showed up from Mount Shasta in an RV, and the next thing you knew we were in the middle of that world. There were all of these people coming over. It was pretty crazy.

OTR: Sky told me that his name was like three lightning bolts: Sky Sunlight Saxon. He was quite the character and free spirit. What did you really take away from your time together?
BC: Sometimes when you’re dealing in reality with somebody, you can get caught up in what is real. At one point I was on the phone with Sky and his wife, and they were talking about trying to get Sky a reality TV show, and they were calling me asking me for my advice. I was thinking: "This is crazy. Who’s going to put him in a reality show?" I tried to tell them that, and then they got upset with me, like I was being a downer Debbie or whatever. Then when he passed, of course, I let go of those silly things, and I realized that he really came into my life at this really key time.

He reminded me that when I was really interested as a musician was when I was in that moment where you’re not really sure what’s happening but something tells you that something magical is happening. He really brought that back into my life and made me realize that I didn’t want to make music anymore unless I was really going to try to be that person.

You can reach this point in your musical life where you have all of these expectations and you kind of know what’s being asked of you. Dylan talked about it so eloquently in his Chronicles book. He said he knew that people wanted him to be the old Bob Dylan, and he really wanted to give it to them but just couldn’t. You get this sort of cloud over you where you feel like you’re disappointing people but you don’t feel disappointed in yourself. What do you do with that? Sky brought into my life a rebirth of just saying: “Fuck it. If I’m going to go down, I’m going to go down doing things my way.” You have to do it full-on. You can’t pull back. And he lived his life like that.

It was fascinating to watch Sky do a vocal take. We would come up with this beautiful piece of music and map out what it was supposed to be. Then he would go in there and completely improvise off the top of his head. It was almost like a jazz musician. He was singing about spaceships and Russians and dogs. He was so in his element that there would be this incredible moment of synchronicity. Your jaw would just hit the floor. He didn’t sit down and try to figure out how to be Sky Saxon. He was Sky Saxon. He’d been Sky Saxon for so long he couldn’t not be Sky Saxon. Was he a fucking crazy guy? Yeah. But there’s something beautiful about the shamanic willingness to just be that person and take that on and not pull back from the edge of it.

Sky reminded me that that was my original attraction to rock & roll, not getting on MTV. He really brought me back to that, and ever since then I’ve really been a changed person. So after he passed away, I really had to honor that he had brought that into my life. He was the magicmaker.

OTR: It sounds like all of this is interwoven into the story of Teargarden by Kaleidyscope, which seems like it’s shaping up to be quite the spiritual journey – both in terms of the music and in what must be an exhausting creative process for you.
BC: I’m so excited by it. For years I felt like I was working for others and wasn’t really sure how or if the others would return the favor. To be in my own sort of world and be happy, it’s a really satisfying feeling. I don’t feel like I have to hurry or do anything I don’t want to do. If I want to put a song out, I can put it out tomorrow. I don’t have to wait for anybody. It’s a really cool feeling.

OTR: Is this one of the first times you’ve felt that way?
BC: A lot is happening that’s sort of beyond my control, but I would put that more in God’s hands, just not the god of MTV or the label. There have just been a lot of beautiful synchronicities that I flow with. The most obvious example is hiring Mike [Byrne] to play drums, to take a chance on a 19-year-old that’s never been in a recording studio or on tour. That took a lot of trust on my part, but I felt it in my heart. It kind of goes back to Sky. The spiritual vessel you’re looking at is not as important as the light within.

I played in a band that achieved a lot of success, but we achieved it at a great personal cost. There was a beautiful light in the original Smashing Pumpkins, but it was a very, very dark light. I think the world was attracted to that, and I can understand why. We brought a lot of things to the surface like child abuse, all sorts of things that people were afraid to talk about, and I really commend them for supporting me on that.

It was not a sustainable system. We were meant to implode. This is different. I say to everyone I play with now, "If you don’t want to be here, don’t." It’s not going to be one of those things where I bind you to me or me to you. The door is open. So when you see us on stage or in the studio, we all want to be there. It’s a totally different energy in my band now. We’re not bound by some cloud over us or some moment in time that’s hard to say no to. I think it’s really hard for people to understand that because they keep wanting to put it back into old frames.

OTR: Things definitely seem a bit brighter around the edges for the band now, and you’re more directly addressing some spiritual concerns. How have your fans reacted to that change?
BC: It seems to engender one of three reactions. One is, "Cool, you’re being yourself. I like that you’ve included me on your journey, and I don’t take it personally because I have my own beliefs." Two is confusion: "Like, are you into Jesus now?" And three is, "Why are you telling me what to do?" It’s weird to me when someone basically says, “Share with me the things I want you to share, but don’t share with me the things I don’t want you to share.” As an artist, how are you supposed to separate the paint?

OTR: The point is that you’re more comfortable now creating one of those three reactions.
BC: Exactly. In fact, I think that all three are appropriate and really speak to that person’s own perception of the reality. 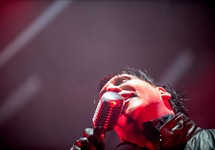