A new district throws a party 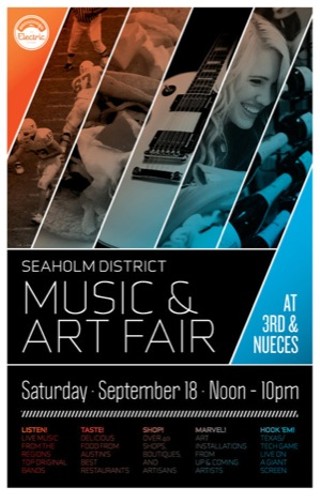 There’s another festival on Austin’s calendar this Saturday, but according to the event’s producer – the Electric Company’s Jason Hicks – the Seaholm District Music & Art Fair will celebrate Downtown in a different way.

“It won’t be taking place at the power plant itself,” Hicks explains. “It’s an area designated as the Seaholm District, a whole new district that they’re naming, and the plans for it are a new center for culture, entertainment, and living. As soon as the economy comes around, there’s plans for seven more towers of 25 stories or higher.

"Nobody’s throwing money at projects like that right now, but it’s all going to happen sooner or later. So, we wanted to be on the front end. We’re working with some of the businesses in that area to kick it off, let the public know the future of the area, and this event celebrates that. We wanted to build some new events that will grow with the new district.”

Centered around the intersection of Third and Nueces, the event is free to attend, and the spotlight will be music, including Papa Mali, Two Tons of Steel, Danny Malone, Moonlight Towers, the BlueBonnets, and Hector Ward & the Big Time.

“I think it’s a lot like Austin,” Hicks claims. “Music fans will find something out there that they haven’t found in the past, and that’s always been one of my goals in booking anything. I think that as long as you’ve got good musicians onstage playing good music, all the fan bases are going to grow by playing our event.”

Besides music and the usual art and food booths, the Alamo Rolling Road Show will broadcast the UT/Texas Tech game from Lubbock on a 40-foot screen. “It will be the biggest game-watching party in town,” he continues. “Sure, there are a lot of festivals, but this is something that hasn’t been done before. With the arts and the game, and the fact that so many people live in that area, it will cater to them as well. We’ve also made some accommodations for families to try and attract them.”

Perhaps the best part is the charitable aspect, as Hicks promises a minimum donation of $5,000 to the Dell Children’s Hospital. “We’re building this event for the long haul,” he assures. “We’re confident that it’s going to grow – something that people are going to look forward to in the fall.”