The Cult’s Ian Astbury on Boris and "The End"

Two nights after Boris and SunnO))) served Sunday communion, ATP presented an encore rendition of Altar at the Brooklyn Masonic Temple. The occasion also served as the world premiere of Boris’ new collaboration with the Cult's Ian Astbury, BXI, an unlikely meeting point between the Japanese trio’s Heavy Rocks and the latter’s operatic brooding.

Austin Chronicle: How did you first hear about Boris?
Ian Astbury: I had heard the name before and that peaked my interest - this mythical band called Boris with a female guitar player, Wata - but it was really the Pink album that drew me in. Then I went to see them in New York and that was it. I was completely smitten with them. It wasn’t just heavy music. There was a real craft to it; something deep was going on in their music.

AC: Boris has done a little bit of everything over the years. Was there a particular phase of their career you were interested in exploring with them?
IA: I like elements of all of it. It took about two years to build this relationship up. Originally I contacted their agent about Boris playing with the Cult. I was also pretty obsessed with SunnO))) and Southern Lord. The music that they make is resonating with the sentiment of our times. It’s dystopian and disconnected from nature.

Boris really forced me to do some soul searching because the music they sent for me to pick from was just so emotive. I knew that it was going to have to be something really honest. I was writing and living in New York when I started putting pictures together. I just lived with the material. So by the time I arrived in Tokyo in May to record vocals, I was pretty prepared for the performance.

AC: Was there much of a language barrier?
IA: Not really. Atsuo speaks pretty good English, but you can’t really talk about music. It’s instantaneous; you know if it feels right. Boris doesn’t let anything slip either. They’re very private, somewhat reserved people - you don’t just walk into a room and earn their trust – and very diligent about details: tonalities, sentiments, textures, layers. I know one critique of me is that I’m a grandiose or pretentious performer, but for me it’s always been about not staying small. I’d rather reach for something and maybe fail in that attempt. Then in hindsight you can say, well, that didn’t work. Throughout my years in the Cult, I always pushed myself to go farther and deeper and that’s why I ended up working with Boris. When you get acknowledgment from Wata, that look of approval, you know you’ve done something really cool.

AC: How would you compare this collaboration to your experience with the Doors?
IA: It’s very comparable. Boris are master musicians that really take time with what they do. The art comes first, and it was the same way Robby [Krieger] and Ray [Manzarek]. They don’t gush or high five. It’s not jock rock. With both bands, the sound that they’re going for and the space that they fill, there’s no room for that. It’s serious business.

The only time I’ve performed with Boris, at the noise fest that Laurie Anderson and Lou Reed curated at the Sydney Opera House, we did “The End.” Atsuo had heard from a friend that I did it with the Cult as a brief coda or homage, but he wanted to do the whole thing. First off, if you’re going to perform “The End,” you better find your balls. Secondly, you better find that dark space. So I walked around for three hours, just getting in the right space. Then I walked straight up to the mic, put my head down, a sign of reverence, and then it was like every switch was flipped on. I had never experienced anything like that before, the sheer volume that they play at. When they hit something together, the whole room felt it. Everyone was having the same experience at the same time.

I felt it. We opened Pandora’s box. 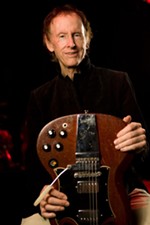