Rodrigo y Gabriela's patriarch will be due a viking funeral one day. 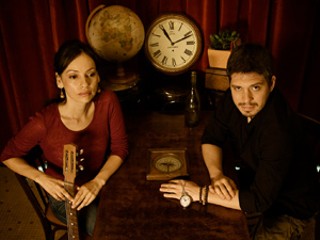 Friday's headliners outdoors at Stubb's, Rodrigo Sánchez y Gabriela Quintero, have taken acoustic music metal and world music indie - first from Ireland and now back home in Ixtapa, Mexico. Rodrigo's accent over the phone from Boston is as mellifluous as the duo's six-string serenades.

Austin Chronicle: You've returned to Mexico after living eight years in Ireland. What facilitated the move back?

Rodrigo Sánchez: It’s simpler nowadays that we’re able to tour around the world. When we started this, we were just an Irish thing really. We spent so many years there. It was difficult for us to go back to Mexico for a month while continuing to tour the UK. But when we started touring around the world after the first album came out in 2006, we didn’t see any reason four us to stay in Ireland. We love Mexico, and especially that part of Mexico, the Pacific side. We went to that little town, right on the beach. It’s a great place to be. When we go there we disconnect completely.

RS: [Chuckles] Yeah, it kind of worked out for us. When we went there we didn’t have any financial freedom. We didn’t have any choice really. We were just making a living and it was easier for us than moving like crazy. Nowadays things are different. Being in Mexico and owning your own home; we built our own studio as well, right there on the beach. There’s nothing compared to living in your own country and being close to your family.

AC: Has your success surprised you?

RS: It is surprising, because we didn’t really plan it. Every day, every venue, every country that we go, it’s getting more natural. I think it’ll always be surprising, especially for the media, to take acoustic guitars without vocals and be open enough to support the music the way it has been supported. And they help us get to people that have been open enough to receive it. That’s surprising and it will be to the end of our careers. It’s very unusual. It’s very unusual that we can share the stage with musicians that we think of as our heroes, from Al Di Meola to Metallica to Rage Against the Machine. I mean it’s so weird. That’s very, very, weird that we can share the stage with them. That they respect what we do and that we jam together. And for us to play 10,000-capacity venues around the world is very surprising for the acoustic guitar itself. We are lucky, and we are very thankful.

AC: Your previous performance here in Austin filled Stubb’s. How did you seduce indie nation with just two acoustic guitars?

RS: I think, honestly, it’s a combination of what we do. Basically, we come from a rock background. We spent so many years with a metal band back in Mexico that was not successful at all, but we learned everything from there. We still have that. Our recognition by some of the main bands has helped us to allow the kids to understand that this is not flamenco music or classical music just because we play acoustic guitars. It has endless possibilities to mix different genres at once. I think people are a little tired of listening to the same.... Nowadays there are so many bands – so many, from different kinds of genres – but they sound the same. They last two years, two albums, and then they can’t follow up their careers because there’s another band the media helps more because they’re new. That’s the way it works. I think people are getting tired of that as well.

AC: Austin is just down the road from San Antonio, which is known as one of the heavy metal capitals of the world. Why do Latinos like their metal so much?

RS: That’s a good question. Heavy metal is very big from Mexico to Argentina and I remember when we were kids the metal bands that started playing Mexico were playing stadiums. I remember seeing Metallica for the first time in ’91, and Iron Maiden. They were playing stadiums. It was very surprising, but very revealing. Metal music is about not being told what to do. It’s about rebellion. It’s about an attitude that goes against the machine. Obviously being part of those countries that have been so repressed for centuries – it goes perfectly with young generations. I think that’s the link.

RS: It’s exactly the same. We’ve been very lucky to be very close to Al Di Meola recently. He’s been guesting on a lot of our shows. He’s becoming a good friend. I grew up listening to Al Di Meola, and he’s probably one of my main influences. For me to be onstage with him is a dream come true. He’s very impressed by what’s been happening to us and it reminds him a lot of what he went through when he was with the trio. There are a lot of similarities. Obviously they weren’t playing anywhere close to rock music, but they had the energy. Rock music is based on guitar, and although they were playing jazz-oriented kind of music, they had the rock energy going through it, the solos and all the improv. Al D has a lot of references to what we do in that. What we do is the same version as that only 25 years later.

AC: Another song on the new album, “Atman,” is dedicated to Dimebag Darrell. Did you ever see Pantera?

RS: Yeah, of course. I saw them twice in Mexico and it was amazing. They were at their peak. The first time I saw them they were opening for Kiss when they reunited for the first time in the early 1990s. It was in a 20,000-capacity arena and really, 15,000 went there to see Pantera. It was amazing. They knew that, and they came back six months later headlining the same venue. And it was packed. They did two nights.

AC: Last Friday was the 20-year anniversary of the death of another Texan great, Stevie Ray Vaughan. Do you know his stuff?

RS: To be honest, I’m not very familiar with him. I’ve seen a lot of videos though. My friend Alex Skolnick, who guests on that track to Dimebag Darrell, he’s in Testament, and he’s a super fan of Stevie Ray Vaughan. Funny enough, when I saw Alex two months ago in New York, he was showing me all these videos about Stevie. It’s amazing. I would really like to get more stuff, and Alex himself told me he was going make me a mix of what he thinks is best. I’m dying to get it.

RS: Yes, I just got a copy from them.

AC: They’re another of the great Bay Area thrash bands. How did you hook up with them?

RS: They went to see one of our shows last year in Oakland. They talked to someone on our team and told them, “Please let them know that the band is here.” I was very surprised. We gave them backstage passes, and Rob Cavestany, the guitarist, is just such a nice guy. He’s so friendly, and we became friends. He asked me if we would be up for it, so of course, we were delighted to be a part of the album.

AC: Will this lead to more such work? Indie rock is dead, but metal...

AC: Would you like to hook up more such collaborations?

RS: Yeah, of course. I would love to be part of the return of proper metal. It kind of died out for a few years, but thanks to these bands like Death Angel and Kreator – all these hardcore heavy metal bands that kept on doing it – it's coming back. They kept touring, maybe smaller venues, but they kept touring and touring through the years. It’s not a fashionable thing. It’s not in vogue. When you’re a metal head, you die as a metal head. You can’t be in it a couple of years and just get out of there. I’m so happy, because if you listen to Death Angel’s new album, they are inspired. To me, it’s their best album after so many they’ve done. They’re inspired because they feel that same vibration. Their shows are growing after 10 years, 15 years of playing smaller venues. They’re very excited, and I love to be part of it – to contribute somehow because I come from there.

AC: Who would you love to guest with?

RS: There are so many. I grew up with the thrash metal scene. Getting to work with Alex was amazing, but if I get to do something with the actual Testament, that will be extremely cool for me. Overkill. I was a crazy fan of Overkill and I know they have a new album coming out. A lot of people didn’t like Bobby Blitz singing, but I think it’s amazing. To work with Megadeth would be great. Having recognition from Metallica and getting to know them recently and knowing that James [Hetfield] respects what we do is something great, but I don’t think we’ll ever get to do something together with them though that would be awesome.