Westway to the World

Momo's celebrates a decade on Sixth 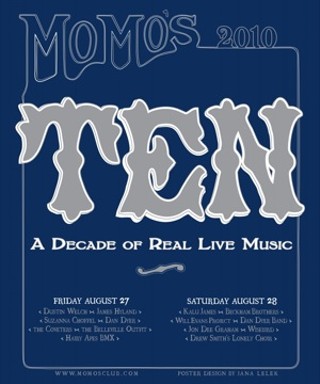 Among hundreds of music venues in Austin, only a couple have risen in popularity and influence over the past few years. One of them, Momo’s, that funky space above Katz’s Deli on Sixth Street, is celebrating its tenth year this weekend. Anyone remember when it was called Top of the Marc? Owner Paul Oveisi does.

The actual date the club opened has been lost to time, so it became tied to Oveisi’s birthday, which is Thursday, although he’s certain Momo’s started sometime in the summer of 2000.

“It was Top of the Marc and run by Katz’s for a long time,” the 38-year-old recalls. “Barry [son of owner Marc] took over and was doing a fantastic job. One of the first things he did was look at the books. He saw that the Top was losing money and decided to rent it out hoping to make it a profitable venture. The first two guys tried to run it kind of like Lucky Lounge, a bar that occasionally had music. A cool, hip bar, music was going to be part of it, but it wasn’t going to live and breathe music.

"I don’t remember why they exactly put it up for sale only 6 months into it. I was leaving the practice of law because I wasn’t digging it. I was looking for something to do. I was probably going to be an entertainment lawyer, opening my own practice. I saw this club and figured me and my brother could run it on the side."

There were some rough times at first. Oveisi was running three bars simultaneously, including the Steamboat. After closing the rock bastion in the middle of Sixth Street, he dedicated his time to Momo’s, which began to flourish with the help of some notable residencies.

“Sunday nights with the South Austin Jug Band was my first residency,” he claims. “Those used to be slow nights: No cover, two-dollar beers. I bartended. My sound guy was my bar back. We’d split the tips. Then it kind of blew up overnight. We also had Los Lonely Boys and Del Castillo playing every Tuesday night to only about 50 people or so.

“There was a moment where we were really considering calling it quits. It was right around the time that I closed down the Steamboat. I was worn thin and money was tight. I can’t remember how the conversation started, but I got some advice from a friend. The advice was very wise: ‘If you want to keep it going, you really should consider converting it to a bar. Don’t charge cover.’ What he was describing was kind of like what’s in the neighborhood now. Posh, nice, more of a scene. It was good advice, but I would have wanted to hang myself if that was what I was doing every day.

"So I disregarded the advice and said, ‘I’m going to do this for one year and if it’s not turning around in a year, then I’m going to weigh my options.’ It wasn’t a magical year, but things kind of turned around a little bit. Business picked up a little. Our identity as a music venue started to come around. A year later, I said, 'Let’s give it one more year,' and here we are now, it’s a decade.”

Most recently it’s become the first club to offer its stage on a regular basis to the Band of Heathens, Suzanna Choffel, and Warren Hood – acts that have gone on to draw local, if not national, acclaim. This weekend reflects some of Momo’s success with a lineup that includes Choffel and Hood as well as diverse acts like Jon Dee Graham, the Belleville Outfit, Dustin Welch, a reunion of the outre funk group Hairy Apes BMX, and my fave new act, the Southern rock lovin’ Wisebird.

This past South by Southwest opened his eyes to what his stage could offer, with a lineup that ranged from acts from Korea and Colombia to Sarah Jarosz and Chuck Prophet. For the future, the club owner says he’s looking to book more national acts. “Our weekends will be more road shows, more premier acts, more regional acts,” he discloses. “I’ve got Michelle Shocked, Ryan Bingham, the Weepies, and some New Orleans bands coming through this fall.”