RaquasoXXX Cast a Spell on Red 7 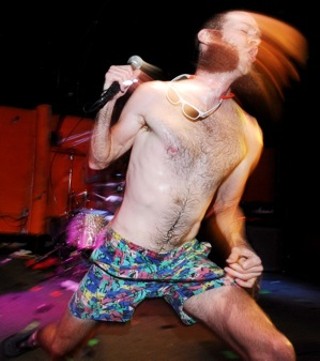 On Sat., Aug. 14, Austin's Red 7 hosted eight bands on one bill who were making their debuts as part of La Lotteria, described on the Facebook event page as a "random grab bag of impromptu bands and musicians." Prompted by friends of mine who participated last time, I signed up. Click through to read my diary chronicling the event.

Thursday, August 12
Here's how it works: There are eight drummers who take turns randomly picking names to decide who plays in their lottery band. My band ends up being a fourpiece; I think there are a few fivepieces as well. I luck out being chosen by Eric Green, who used to play drums for the Riverboat Gamblers, a band I have a ton of respect for and who put on an amazing live show. The singer for Queen cover band Magnifico, Zach Hall, and Adrian Muñoz (ex-Dynamite Boy) round out the group. Not too shabby. We're set to write and rehearse an approximately 20-minute set on Friday and then perform on Saturday. Why do I get myself into these things? But seriously, it should be fun and I'll definitely be working outside of my comfort zone, which was one of the reasons I signed up for La Lotteria.

Upon returning home following the draft, I decide I'll work up a couple simple chord progressions for rehearsal the next night. Almost immediately, my guitar amp, which I just had repaired, completely blows out. A crazy crackling sound followed by a dead amp. No power. Nothing. Not the kind of start I was hoping for. The good news is it happened at my house and not during rehearsal or the show. So we'll see, maybe I'll be playing bass instead of guitar. I'm much more confident at bass but was looking forward to playing a gig on guitar. Maybe Adrian and I will switch off. I wish we had another bandmate and then I could just play tambourine and/or cowbell or be the weed holder.

Friday, August 13
The full band meets for the first time (I missed Zach at the Thursday night lottery). It's decided Adrian will play guitar and I'll play bass. Good thing we're flexible. This ends up a being a wise decision as Adrian is a veritable riff machine. With Eric leading the way behind his kit, Adrian freestyling guitar licks, and myself competently enough following along, we have two solid songs within half an hour or so of getting started.

Off the top of his head Zach already has two song titles that are worth the price of admission alone: "Dick Thief" and "Don't Tease the Wizard" (full lyrics below). I once again can't believe my luck at drawing three bandmates so musically accomplished. With Eric and his Tommy Lee-esque drumstick twirls and Zach's charisma, we're gonna have a hard time screwing this up.

We round out the set with one more original, "Bargain Shopping," and a cover of the Beatles' "Back in the USSR." We also half-assedly consider the Misfits' "Last Caress" and the Police's "Every Breath You Take."

I'm surprised we've accomplished as much as we have. More decisions have been made at this two-hour rehearsal than would be made typically in five to ten. I'm a big proponent of self-imposed restrictions, and it has certainly worked in our favor. And did I mention we have a band name already? We are to be known as the RaquasoXXX and will have a pool party/beach theme.

Saturday, August 14
I'm relieved that we're having another rehearsal before the gig. Zach has worked on the lyrics and I've rented a much nicer bass, so our sound is starting to come together. We learn "Back in the USSR" by holding up my iPhone playing a YouTube clip to a mic going through the PA. These damn smart phones sure do make things easier.

After running through the set twice-ish, we decide we're gig-ready. And like Adrian says, "If we suck, who cares?" Believe it or not, this makes me feel much better. I've been plenty anxious throughout this process. I'm not worried about my bandmates, but rather, worried I'm gonna screw it up for all of us. I console myself with the knowledge that I've picked up 20 minutes worth of material in 24 hours, and these guys are so nice that if I do screw it up, they won't care in the least. Or will pretend not to.

The Gig
Fate is once again on our side as we draw the third slot out of eight. A prime position, as far as I'm concerned. We don't have to open the show, and we also don't have to worry about playing late and getting too drunk before our set.

My relief is short-lived as the first two bands (Uplifting Experience and The One Night Stands) both rock the house. Looks like it's time to strip down to nothing but my swim trunks and plug in the ol' four-stringer. Oh yeah, I'm playing this show topless and shoeless. Two firsts for me.

Our set is a blur, mainly due to Zach's incredible stage presence and a thoroughly responsive crowd. I have not enjoyed myself this much on stage in a long time. I'm having a hard time concentrating on playing bass cuz I don't want to miss out on any of my bandmates' antics.

We steamroll through our four-song set while Zach works the entire room. Literally. Dude knows how to tear it up. Eric is cracking me up as well, twirling his sticks between beats. I'm a drummer, and that shit ain't easy. During set finale, "Bargain Shopping," Zach gets the crowd involved and lets them share their favorite shopping spots. Everybody has a smile on their faces.

From the first sloppy note to the last, there is no doubt we completely rocked the hell out of the Red 7 La Lotteria audience. I am not one to congratulate myself, but there is no question that we stole the show. I actually feel bad for the bands that have to follow us. That being said, there was not a single dud in the bunch. I could write another 1,000 words on the other bands (but I'm not). Feel free to leave a comment sharing your thoughts on your favorite bands of the evening.

With the talk of a possible 7" and several gig offers, this is most likely not the last you will hear from the completely randomly thrown together RaquasoXXX.

Don't Tease the Wizard
He's got a beard and a pointy hat and if you find something
amusing about that you better watch your back.
'Cause he's magic!

Don't tease the wizard.
Do you believe in spells?

He holds the sceptre of the ancient one and he wields it well.
He is the master of magicness.
One flick of his wand, he'll destroy your mind and shrink your penis!