Got the Dog in Me

David Kimbrough, Jr., in the name of the father 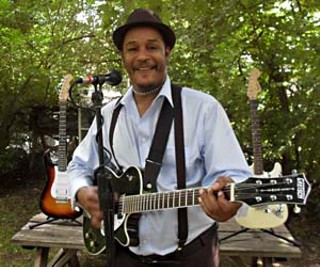 David Kimbrough, Jr. cut his Fat Possum debut I Got the Dog in Me under the alias of David Malone to avoid confusion with his father, Junior Kimbrough. Since the passing of the great Mississippi bluesman in 1998, however, Kimbrough has proudly carried on the family legacy, and on Saturday the juke-jointer headlines an 80th birthday tribute at T.C.'s Lounge.

Off the Record: My entry point into your father’s music was through the Black Keys. What did you think of their tribute album?
David Kimbrough: I thought it was great. It brought a lot more attention to my father. I’ve never met the guys, but their work is terrific.

OTR: What is it about your father’s style that so many people seem to connect to?
DK: I think people are drawn to that rhythm my father laid down. It has the same effect on me to this very day, and I came up with the music. It’s something about that groove, the way he prolonged it in such a great, redundant way. Once it gets going, it gets into your soul. It takes you to another level. To me, it’s got that spiritual vibe to it. It’s like you’re in church; it makes you want to shout. It gets into your soul.

OTR: When did you start playing with your father?
DK: I started tuning his guitar in 1983 and I did my first professional show with him in 1986. From that time, I had a taste of the guitar, whatever he did I wanted to do, but I couldn’t grasp it. My mind wasn’t developed enough to understand what he was doing. So I started playing the drums for him.

Later on as the years went by, I was incarcerated. My dad was singing at this place in Hollow Springs for the Deep Blues movie, right about in 1992. They were doing some recording, “All Night Long,” and I’m incarcerated and I’m sitting around playing with the prison band. I hear a song come on the radio, and I tell my partner, “I know I’m not going crazy. That’s my daddy playing that song.” They started to jiving with me. You how it goes… To make a long story short, the song came back on the radio again, and they said "Junior Kimbrough." We all celebrated that little moment. ...

Not even a week later, Robert Palmer and the guy from Fat Possum came down to Parchman.They had gone down to my daddy’s juke joint and he was just sitting there, sobbing a bit, and they asked him what was wrong. He said that he was thinking about his son, and that I had as much talent as he got or more. They said they wanted to get me out to play keyboards. They said they could get me out in two days to a week. It turned out that they wanted me to do my own thing, and not confuse myself with my dad. I went under David Malone.

OTR: What was your time like at Parchman?
DK: I don’t think anybody ever wants to be locked up, but when I got there, I actually got a second shot at life. My being locked up only enhanced how I felt about my career and music. Everything started coming to me right before my eyes. The band director there, bless his soul, he taught me how to care about things, and he told me, “You’ve got time to sit down and right some songs.” I wrote all of these songs while I was there, but I haven’t ever recorded them. I haven’t even touched them. They’re sacred to me. I just record brand new stuff off the top of my head. That stuff’s precious. It gave me a chance to really write about my life.

At some point in time, I know I’m going to record that stuff. Now that I’m sober I can do that. When you’re young, the blood running through your veins you’re thinking crazy things, and doing crazy things, but as you get older though you think more rational. Every night I look at my daddy on my computer. It seems like he’s talking to me through his music. It’s just my own little world with my dad. Now I’m just in the making of doing exactly what I need to be doing, to help complete history.

OTR: Do you feel a responsibility to carry on your father’s legacy?
DK: Don’t nobody know him like I do. He always kept me with him. I know every move he made, his sound and the history. I know the depths of it. In the future, once I get a nice toehold on things, I’m going to present these unheard songs to the public. I want to play it just like he would have.