The Coathangers give Monday the finger

The Coathangers rattled the walls of the Griffin School Monday afternoon, and few were left unmoved. It was the first day of the second session of the Girls Rock Camp Austin, and the Atlanta quartet led the scream therapy.

The ladies played nearly a full set of punk goodness for the campers. The last song, "Don't Touch My Shit," had to be retitled for impressionable ears, but when singer/guitarist Julia Kugel handed mics to about five or six girls and told them to "scream along," the response was amazing. The kind that gives you goosebumps and makes you misty-eyed and hopeful that the next generation of girls is going to be alright.

Check out the GRCA showcase this Saturday, July 31, at the HighBall. Starts at 1pm. 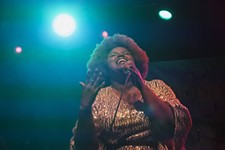 Girls Only
One of Austin's smart girls goes national

The Urge to Break Your Skull
The Coathangers' hook and crook